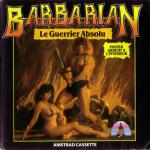 "...and lo, a mighty warrior shall come from the frozen wastelands of the north, and he will stand alone against the forces of darkness..." The Book of Death.

And no sooner does this muscle-bound barbarian arrive than he confronts me with his mighty broadsword, launches himself into the air and cleaves my head from its shoulders.

Well I wasn't taking that lying down, was I? Actually I didn't have much choice as I slumped to the ground, blood and gore everywhere.

Yes, Barbarian is here. Shout it from the rooftops. Tell your friends. Get it before it gets you. Do you get the idea that I like Barbarian? Dead right.

Palace games are always shrieked class. Cauldron I and II and The Sacred Armour Of Antiriad. Sheer quality, sheer enjoyment. And now Barbarian carries on that grand tradition. This is combat in the raw, red in tooth and claw, steeped in gore.

But first the plot, fellow hack and slashers. The beautiful Princess Mariana - that's her on the cover, in case you haven't guessed - is desired by the evil sorcerer Drax (and who can actually blame him). Unless she is delivered to him, an unspeakable doom will be inflicted on the people of the jewelled city.

If, however, a champion is found who can defeat his demonic guardians, she will be allowed to go free, untouched.

All seems lost as man after man is sent into blood-soaked oblivion by the cruel and deadly sweep and thrust of steel. And then from the north, came the Barbarian, the last hope to free the Princess.

The game is split into two parts, combat practice and fight to the death. Each character can survive six blows before biting the dust. Points are scored for different moves and a time limit is set in a two player battle.

The action takes place against two backdrops - in a forest clearing and in a pit of death, watched by Drax and the Princess.

The characters are big, they bleed if hurt and are superbly animated, each capable of fourteen moves. To master them all takes real skill and to be able to use them all in the heat of battle takes a cool nerve.

The animation is the most realistic I've yet seen. You'll gasp at the flying neck chop and the web of death, squeal at the neck, body and leg chop. You'll just die.

The fighters can also duck, jump, roll across the floor, kick the opponents and they can also resort to some skull-cracking, brain-banging headbutts.

After the Barbarian has suffered six blows, he slumps forward to the ground.

Not satisfied with this, the victor adds insult to injury by kicking the defeated warrior onto the floor. Victory is complete.

It is possible to chop your opponent's head off. It's hypnotically gruesome as the head bounces to the floor and the body slumps, spraying blood. The victor raises his sword in triumph.

This could be said to be a little over the top, senseless violence.

Yeah, too true. It's better to have bad taste than no taste at all, as the Ed is fond of saying in his more mellow moods.

The corpse of the vanquished is dragged from the arena by a little green monster. And watch out if a head is lying around. He kicks it off screen with a squalechy thud.

Barbarian actually isn't a really original concept. You've all seen something like it before in the myriad of combat games. What makes it so special is that Palace panache and faultless quality and craftmanship of the designers, artists and programmers.

I could go on but I won't. Enter the competition to win our cover artwork, read the feature on the Birth of the Barbarian, and make sure you get the giant Barbarian poster in next month's C&VG. But above all, get the game. You won't be disappointed.

What makes Barbarian so special is that Palace panache and faultless quality and craftmanship of the designers, artists and programmers.