Published in Your Sinclair #37 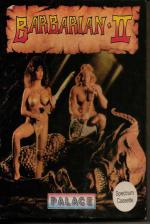 Barbarian II: The Dungeon of Drax

Gwoaaarrrr! Woohooohooohooohooh! WAAAAARRRGGH! (Get a bucket of water, someone. Ed) Ker-SPLOSH! Thanks, I needed that. Now, where were we? Ah yes, Barbarian, which vaulted suggestively to number one on the back (or indeed the front) of the curvacious Maria Whittaker. Another year, another beat em up, and here we are again with the still pneumatic Ms Whittaker posing in tiny strips of metal that only the most broadminded person would ever describe as clothes. No doubt the game is throbbing to the top of the charts as I write.

What? Did I hear that properly? Did you ask what the game's like?

Oh I see, you want to know what the game's like. Well, not a lot, really. It's just another beat em up, and not a very interesting one at that. But does anyone really want to know that? Isn't the game perched lustily on top of the Gallup Top Thirty?

For indeed that's the problem with these Barbarian games. They're basically a case of "nice poster, shame about the game," and while this is much better than its predecessor, it's still not terribly exciting.

You can play either the barbarian or the princess and there are three levels to fight through - the Wastelands, the Caverns and the Dungeons - before you get to the Inner Sanctum of Drax. Each of the levels is mainly just an excuse for different scenery, and is made up of 28 'rooms' arranged in a rather tricky maze. Unfortunately to get through the maze you have to fight umpteen badly drawn nasties, each of which needs dispatching in a different way. You also have to collect two magic thingies from each level which will give you a chance in the later harder levels.

It's all pretty swift, and quite slickly programmed, but yet again it seems that a software company has tacked together two fundamentally incompatible game types without thinking of the consequences: in this case, slash em up and arcade adventure. As we've seen so often before, the combination fails because neither works by itself and they definitely don't work together.

Not that it's entirely without challenge. It's certainly quite fun to work out how to dispose of the saurian beasts, mutant chickens, stabbers, floaters, orc guards, giant grubs and so forth, that are so completely determined to chop you into little pieces and chuck away the bones. But the maze is a distraction, and there's not enough in the fighting to distinguish this from the eight billion other slashfeasts that the software industry has churned out over the millennia.

Last year Barbarian sold a healthy number of copies and surprised everyone. But considering its commercial success, it wasn't exactly prominent in our Game Of The Year feature at the end of the year. Barbarian II is unlikely to improve on this performance. Still, to all you lustbuckets who have already pinned up their posters. I'm sure that's not really important. Is it?

Slobbery follow-up to everybody's fave slash 'n' drool game of 87. Fab poster, but the game's not up to much.

Barbarian II: The Dungeon of Drax

Slobbery follow-up to everybody's fave slash 'n' drool game of 1987. Fab poster, but the game's not up to much.