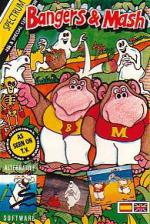 Don't you think monkeys are cute? They've got cuddly coats, big, funny ears and deep, sad eyes. Aah, dunnit make you sigh?! But they're also rather naughty. Just look at Bangers and Mash. Although they appear to be cute, cuddly creatures, lurking behind that innocent facade are two very mischievous little apes.

In fact their mother has got completely fed up with them and sent them out into the forest to collect as much fruit as they can find for the pie she's making. Lazy old cow.

To protect Bangers from the creepy crawlies, Mash has made an inexhaustible supply of mud pies to throw at them while Banger's job is to actually collect the fruit for his mum. But, being the cheeky monkey he is, he's got lost and fallen down a tree trunk, leading to the dangerous side of the woods - and Mrs. Snitchnose's lair. Yes, it's all a bit unlikely but that's the way it goes.

Mrs. Snitchnose is a witch (so whoever married her must have been under one of her spells), and to show how evil and vindictive she really is she's got all her wicked followers out to stop the chimp - from hedgehogs to ghosts to beetles. To be honest I never thought they had it in them.

Grab your joystick and become Bangers, as you guide him around a vertically scrolling maze, collecting fruit for his mum, and diamonds for himself.

I actually really took to this game. It's a good, old fashioned platform romp, which sounds good to me! BAM is like Edd the Duck, but with a monkey instead of a bird, set in a forest instead of the BBC studios and collecting fruit and diamonds instead of stars. This alone makes it a highly recommended title.

Graphic-wise, it's very colourful and well-defined, if a little blocky. The only problem is that Banger's sprite is 'transparent', adopting whatever colour the background is. This means that sometimes it's hard to make out exactly where you are. There are nice sound FX and a catchy title tune too, so your ears aren't left out of the fray either.

Bangers And Mash is a very addictive and playable game. detection is quite accurate and everything moves around very smoothly for a budget game. Bangers and Mash contains that "just one more go" element that makes you want to come back for more and more until you've collected every last piece of fruit.

Bangers and Mash is a simple yet very satisfying meal. The mixture of sausages with mashed potato was an inspiration, and will fill even the most hungry appetite. Oh, the game! Sorry, got a bit confused! Well, it's just as good as its edible counterpart, if not better.

The game's just as good as its edible counterpart, if not better.