Published in The Micro User 7.07 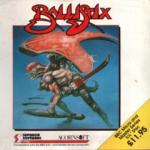 This latest release from Superior Software is basically a kind of cross between air ball and pinball. Apparently, this has already been a smash hit on several other types of machine, but to be frank, after only a short time playing the game I failed to see why it was so popular. Maybe this version is not quite as good as the others.

A ball is thrown into the field of play at the halfway point between yours and the opposition's goals, the idea being that by positioning your firing arrow and hitting the fire key a number of small balls are shot at the large one. Depending at what angle these small balls hit, they force the large ball to move in different directions.

The object of the one player game is to win all 29 levels and amass as high a score as possible. To win a level you have to score three goals before three are scored against you. If you fail at any level the game ends and you have to start at the first again.

The two player game takes place on 30 slightly different areas but the basic principle is the same. The two players fire at the large ball and try to score against each other. Either the greatest number of levels won or the highest score can be the winner. It is up to you to set the conditions for victory before the match starts.

Scoring depends on how impressive are the goals you achieve. If you fire one from just in front of the goalmouth you get a low score; a long distance shot is worth a lot more.

If you manage to collect all the letters, you gain abonus to your score. If you hit a letter that you already have, it is removed from your box. Another way of gaining abonus score is by hitting bonus tiles which occasionally appear.

Several additional features appear in the playing area - ridges, splitters, bumpers, magnets, holes, tunnels, red arrows and oil slicks - all designed to increase the difficulty of each level. The graphics are smooth and clear, but there is little to make them visually more interesting, and the game components could have been made a lot more interesting.

The firing arrow, for instance, could have been made to resemble a gun or something like that - it would look a lot better than the simple arrow.

The sound is passable, but there is nothing new here either. The ball bounces around making fairly realistic noises as the small projectiles are fired at it. I fail to see why game writers feel it necessary to put in the sound of an audience applauding.

Every time you score a goal, you are "treated" to the sound of frying chips. It tends to get a bit tedious after a while and doesn't serve any real purpose. Fortunately, you can turn the sound off.

I found the one player game initially interesting, but after a while it became tedious. The two player version has more challenge and is the only one that saves Ballistix from being acomplete flop. If you can't find an opponent to play it with, I'd forget it.

The two player version is more challenge than the one player and is the only one that saves Ballistix from being a complete flop.