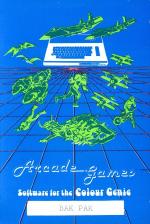 As any Spectrum onwer will tell you, Jet-Pac is regarded as one of the classic arcade programs for their machine. Now on the Arcade Games label comes Bak Pak, written by up-and-coming machine code programmer Nigel Taylor. Bak Pak is *better* than the Spectrum version - faster and more varied and sure to make Spectrum owners green with envy. Eat your hearts out Sinclair sycophants!

The object is to repair, refuel and finally blast off in your damaged spaceship to another planet - i.e. screen. Each stage has its hazards, floating about rather like objects do in weightless conditions. They range from rotating 3D discs to drills and skulls. No doubt there are more at higher stages. We only managed to get to stage five before going to press.

You move your astronaut by thrusting on his jet pack attached to his back. You simply hold down an arrow key and away he soars! Gravity is constantly acting downwards so the down arrow key is not used. Hazards can be blasted away by using the spacer to fire your astronaut's hand laser. This action is used frequently as the game progresses.

To blast off, you must first colect three rocket stages and assemble them. Then you must collect six fuel pods, all before your oxygen runs out. If you can get the oxygen bottle then your supply is renewed. Collecting diamonds scores a bonus - can you afford the oxygen?! All items must be picked up by jetting all over the screen.

What makes Bak Pak immense fun to play is the incredible smoothness of control and movement of your astronaut. It seems that you only have to will it, and your astronaut glides to precisely the spot you want him at. The sheer joy of movement alone makes the program one of the most accomplished we have seen for the Colour Genie. This is achieved by using the text page - hence having access to sixteen colours and higher resolution, but moving figures an incredible one quarter of an ASCII character at a time. Most figures are made up of six to eight characters giving very pleasing animation and nice large sizes. It will be great if other programmers take up on this idea.

We are sure that every Colour Genie gamer will love Bak Pak at first press - we certainly did. It might even account for the lateness of this issue! (Only joking, we never play games here at GUM HQ.)

Every Colour Genie gamer will love Bak Pak at first press - we certainly did.