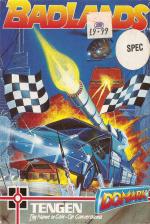 Hi. I'm the new girlie and I don't like this driving lark at all. In fact, it scares me silly - I cower in the back seat with the window open in case of emergencies. Even racing round a screen makes me feel a bit funny. But just for you I've persevered and got round all eight tracks without throwing up once! (Well, I was impressed anyway.)

But all eight tracks of what, I hear you ask? Well, this game of course - a sort of post-holocaust Super Sprint. Come on, take my hand and we'll go off for a good old gander at the future together, shall we? Right, were here. but what's there to see? Well, if I'm not very much mistaken, right over there are the Badlands, a series of tracks which've been built in the devastated nuclear landscape (apparently after the bomb drops it's going to be the survivor's top priority to get a racetrack together. All perfectly natural and sensible it seems to me). It's 50 years after all-out mega-destruction then, and this is where it's all happening.

There are eight tracks in the Badlands, but that's about all - it's a bit of a boring place really, unless all you want from life is some good racing (in which case its probably dead exciting. Me, I'd rather have a good chippy and some flowers).

So how's the game work? Well, to start with I'd better say you can play this one on your little ownsome or, if you're really lucky, with a friend. Other players can join in at any point (so it your pal comes round in the middle of a race there's no problem) which also works out pretty handy if you think the other player is crap and boring - you can just ditch him (or her) and start having some real fun. Having said that, this is one of those games where it's much better fun with two (unless you're one of those aloof and enigmatic - ie boring and unsociable - types of course).

The eight tracks correspond to eight levels of play, and the plan is to get round the lot in superfast time. If you come last out of the three cars more than once you lose a life (at least one is always computer-controlled). Lose all three lives and it's game over, matey.

Okay, so you're tucked up nice and cosy in the hot seat and ready to go. In true Super Sprint fashion (those of you with shorter memories might be better off comparing it to last month's Ivan 'Ironman' Stewart's Super Off-Road Racer or numerous old Codies games) you're looking down on the complete course which neatly wraps around to fit on the one screen. Some are a figure-of-eight shape (with slightly wobbly bits where your car goes under the track and you can't see what you're doing), some are simply a loop.

What they all have in common though is a black featureless surface (so the little coloured cars and icons that litter the track show up quite well) and rather more complicated static background graphics. There aren't many controls to worry about (just Accelerate, Brake, Left, Right and Fire) so you won't need to over-exert those precious brain cells (a good thing, especially for old people like me).

The first couple of tracks should prove pretty easy - use your time to pick up any strange spanners you see lying around. These may look a bit stupid but they're in fact incredibly useful - get enough and you can earn extra big points with which you can buy all manner of tab and groovy additions to your car. You can make it go even quicker or arm it with more weapons and shields (sorry, I forgot to mention - this game has a Roadblasters-style shooting element tacked on). What they won't do is help you dodge all the things 8 littering your way - oil slicks, missiles, nasty sharp turns, falling masonry, barriers which have a tendency to shut the minute you reach them and horrible, horrible tunnel things which (as I mentioned earlier) force you to drive blind and can be very confusing.

So, what's the verdict? Well, Badlands is a pretty straight coin-op conversion (it seems like about the 60th Tengen one Domark have done now) and is pretty much like any other overhead-view track game you could mention really (though with the addition of shooting to spice things up). The graphics aren't brilliant, but it's still fast and fun and just a little bit addictive - especially when you get onto the freeway overpass where there's a good roundabout. (Well, I liked it)

Basically what this comes down to is another racing offshoot of Super Sprint, and while it's not the most exciting one around by a long shot, it's all right. Mind you, the graphics do tend to smack horribly of budget game territory - it's not half as pretty, fun or clever as Ironman for instance, with its bumps and nicely animated little 3D trucks.

There are some neat touches (like the helicopter that picks up the ruined enemy cars once you've trashed them) but it's not especially recommended - especially since the vast majority of you will own at least one very similar game already. Still, it's no great embarassment either.

Rather ordinary Super Sprint lookalike with knobs on. Pales massively next to Ironman.

The graphics do tend to smack horribly of budget game territory - it's not half as pretty, fun or clever as Ironman for instance.