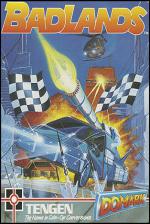 After a nuclear war, life goes on - in the motor racing world at least. Violent races continue on tracks in a zone known as the Badlands. Cars are armoured and armed and losers pay with their lives.

Eight single-screen, plan-view tracks are littered with hazards such as oil patches and spikes. One or two players compete against computer controlled opposition in four-lap races. If a car is destroyed, a helicopter lowers a replacement onto the track, wasting precious time - only the winner goes on to the next race.

Spanners lying on the track can be collected and used in the interlevel shop to buy shields, higher acceleration, missiles etc.

A few years back, I thought the Super Sprint coin-op was outdated rubbish but it was converted to the Commodore all the same.

Badlands is really no better; different graphics and one or two new features. Gameplay's just a matter of steering left and right to negotiate curves and dodge obstacles - hardly likely to tax the brain cells and reflexes of today's gamers.

Aesthetics of the conversion are weak too: crude, boring backgrounds and grating music and engine noises. Bearing in mind Domark's success with previous Tengen coin-ops, Badlands is a vast disappointment.

Badlands suffers from coming after the brilliant Iron Man conversion. The cars are just that bit too large for courses, making overtaking difficult and it's frustratingly easy to crash as you try to barge through.

The pace and rough and tumble action of Iron Man is missing, but the weapons are a nice addition. Also, the two-player mode works well enough - Phil and I had some fun co-operating against the computer player. If you liked the coin-op, this isn't bad.

Overall 41%
A lacklustre conversion of a mediocre coin-op.

A lacklustre conversion of a mediocre coin-op.