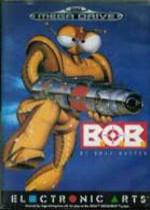 Ever wondered how the Space Shuttle is kept secure? There must be a million people gagging to take it for a joyride. However NASA developed a special crook-lock. Centuries later, Bob's dad is rueing the day he forgot to stick his own anti-theft device on his interplanetary Escort. Bob's taken the car so he can meet his gal, but, crash! A meteor just seemed to jump out at him...

After Bob comes round, he discovers that this meteor is a weird place, with lava lakes, robots and aliens. Luckily for Bob, Pop had remembered to load helicopter packs, assorted weapons and smart bombs into the boat. In his effort to return to civilisation, Bob's going to find uses for them all...

Bob is character created at EA, and his game is a mix of platform shooting influences like Alien 3.

Guide Bob from the warp at the level start to the one at the end. Shoot aliens and negotiate hazards.

Bob's adventures take place in two types of scenery. In the caves, the surroundings are slimy, and lava pools form wide hazards. All the aliens have a drippy demeanour, and hang from roofs, waiting to fall on an unsuspecting Bob. In the futuristic citadel, electric forcefields line walls and ceilings, offering death to Bob. He also has the rare chance to recharge his metallic self in the wall recesses.

As Bob makes his way across the meteor map, he locates pieces of his dad's car, usually they are in the possession of some alien. Each time the car grows, he has to fly it at speed through a mine-littered level with a strict time-limit.

Bob carries many weapons, each rationed strictly. If he runs out of weapons, he resorts to his close-range punch attack (which is next to useless). Here's the Bob weapon menu in full:

To reach high ledges or hidden rooms in his journey across the meteor Bob uses one of the gadgets his father left in the boot. They are:

Despite attempts at a wacky plot, the dull character of Bob and his 'witicisms' made my fillings tingle.

Although the game is large and well-constructed, it is forever verging on the hopelessly inane. For example, a positive feature of the gameplay is the large range of weapons and items to use; the corresponding negative is the feeling of a lack of progress after using these items level after level. It may have seemed a good idea to construct a massive game, saving memory by using the same graphics repeatedly, and Bob is good value for money in that sense.

However, big isn't always beautiful, and coming from EA, Bob looks a slightly below par effort.

Bob is very polished but it hasn't got that spark that separates an okay game from a great game. It's reasonably fun to play, with a massive range of weapons and accessories and it's certainly big enough, but the levels and backdrops are all fairly samey and after a relatively short time, boredom slips in.

Bob is nicely animated but if anybody I knew had his sense of humour I'd hand them a cyanide pill and advise suicide - all this "dude" and "yo" rubbish is decidedly "out" nowadays.

All in all, if you're a platform shoot-'em-up freak, you might get some enjoyment out of this but you'd be better off going for Ex-Mutants instead.

Presentation 72%
P. The menu screen, control method and map sequence are competently done.
N. One of the game's major failings is its lack of atmosphere, and the humorous touches fail.

Graphics 84%
P. Sprites and backgrounds are clearly drawn, and there's tons of animation on Bob.
N. Seeing the same graphics level in and out takes its toll on your enthusiasm.

Sound 67%
N. Very poor. Bob uses that generic EA music, with those horribly unconvincing samples. We've had it on everything from Madden's to Technoclash and enough's enough!

Playability 80%
P. Each level contains some taxing element, and the wealth of weaponry and itemry adds interest.
N. A feeling of deja vu envelopes the player after level umpteen.

Lastability 72%
P. There are tons of levels, and the difficulty factor does rise eventually.
N. Many of the early levels are very easy, and the password system is too much of a gift.

Overall 77%
Bob has all the elements of a high-quality, polished game (which it is), except one: excitement, adrenalin - that 'je ne sais quoi'.

Bob has all the elements of a high-quality, polished game (which it is), except one: excitement, adrenalin - that je ne sais quoi.