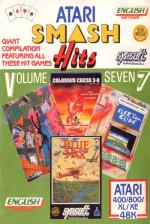 English Software seem to be bringing out a compilation every three to four months on the Atari. Atari Smash Hits was released about October and now Smash Hits 7 is on the market. The only problem with these compilations is that one game appears on them about three times. It was Jet Boot Jack on the very first three Smash Hits, now it is the time of Elektra Glide, which has appeared on Smash Hits 5, 6 and 7.

The other titles included on this compilation are as follows: Colossus Chess 3.0, Blue Max and Alley Cat. The latter of these titles I have never heard of before and it turns out to be a good game.

Elektra Glide will be the most famous title out of the four. On the C64 I found this game a bit of a let down, but the Atari version is very good. The animation on the title screen is of the highest quality, especially the flag waving in the wind. The idea of the game is to race against time around three different countries, with three different types of steering control. To hinder you on your progress are three-dimensional hazards which smash into you. This includes a bouncing ball, a rotating triangle and cylinders which are dropped from a plane.

The music that plays while you are racing is excellent and shows the music capabilities of the Atari at its best. Elektra Glide is well worth its place on any compilation, but this is its third time and in my opinion is too much.

Alley Cat is a total surprise to find on a compilation like this, I for one had never heard of it before, but I do enjoy playing it. The idea is you play the part of Freddy the cat and have to steal kisses from your beloved Felicia. To succeed in this certain tasks must be performed to show your courage to Felicia. If you do complete a task you are given the chance to steal a kiss and progress to the next level. The tasks vary from having to chase four mice out off a piece of cheese to eating twelve goldfish while avoiding electric eels in a goldfish bowl. If you stay on the ground too long you will be caught in a fight with Bowser the dog. To hinder you is the mad housekeeper's brrom which will sometimes call on Bowser for help.

The graphics and sound are average for an Atari game but it is four years old. The game has a very high level of addictiveness because you just keep playing to see Freddy steal a kiss from Felicia.

Blue Max is another famous game for the Atari and is again four years ago. The objective is to make a final assault on three specially marked targets within the city, you have only one plane and very little time to accomplish the mission. On rewarded by the title "THE BLUE MAX". This may sound easy, but you have everything against you, i.e. planes and anti-aircraft guns.

You are able to bomb the targets or go on a bombing run and shoot the enemy planes down during the numerous dogfights. At certain intervals a chance is given to land so damage can be repaired and the plane re-arm and re-fuel. The sound and graphics are dated but that is expected for a four year old game.

Now if you want a change from the arcade element then Colossus Chess 3.0 is for you; chess is not one of my strongest points as the computer found out, it kept beating me. The instructions are concise and well set out. The board display is clear and easy to follow, even for beginners to chess.

The program has got a very good reputation and is highly recommended if you want a good game of chess. The program allows you to record up to 90 games on one side off a disk, so you do not have to finish the game in one sitting.