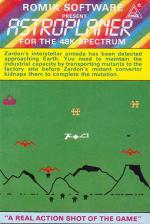 Guess what? Good Old Earth's in trouble again. Apparently Zardon's fleets has been detected fast approaching. Your mission is to transport mutants to the factory in your operating area, protecting them from the nasty invaders. Your combat patrols are vital, defending the Earth's industrial bases.

To achieve your intended aim of teleporting the mutants to the factory you have to hover just above one, then press the up and down keys together. Once the mutant is on board it can be released by descending to ground level. You can either take them all the way, or drop them elsewhere to walk the rest!

Easy you might think? Not a bit of it! I omitted to mention that the Zardons do not take your actions lying down (assuming that Zardons can lie down). By the time you have avoided nasty stars loosing horizontal bombs, and other assorted nasties. It makes the earlier versions of Orbiter seem rather like a bun-fight at the village fete.

Makes earlier versions of Orbiter seem like a bun-fight at the village fete.