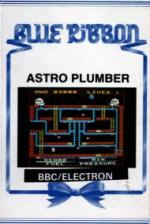 Astro Plumber is one of four new games from Blue Ribbon which, together with a drawing program, are also available togther on a disk costing £9.95.

In Astro Plumber you must fly around a cavern sealing leaks in the air pipes with your plasma laser gun. You mustn't run out of air or fuel in the process, and you have to dodge the hostile inhabitants of the cave.

You aren't told which keys control the game and you're likely to lose several lives while you work out that, in addition to right, left, up and down, you can also jump pressing Return, and that leaks are sealed using Shift.

It's not an easy game to play. You have to work out your route round each screen carefully and you run very quickly out of air.

But the graphics are only average and it's the sort of arcade action you've seen many times before. Frankly, even for £2.50, it's dull.

The graphics are only average and it's the sort of arcade action you've seen many times before. Frankly, it's dull.