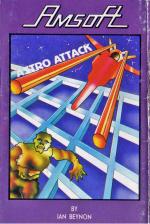 Maze chase games seem to be out of fashion so it was a surprise to find this. It is a space-based maze game with you controlling a spaceship which has been transported to another time.

The rulers of the land are less than friendly, playing games with their captives. You must fight for your life in the 'game grid' and the harder you fight the harder become the attacks.

I find the story is much more engaging than the game itself. The more I played, the less interesting it became. The graphics are good and there are a number of engaging features such as the spinning satellites, but overall too much chase and not enough interest.

The joystick isn't very positive either, which makes life rather shorter than it might otherwise have been. The keyboard controls are more positive, but they could have been sited in better positions. Overall, a game for the light of finger who like to complete sheet after sheet with little variation.

A game for the light of finger who like to complete sheet after sheet with little variation.