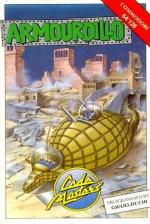 The peaceful planet of Mobanti is under attack from the most violent and merciless of aliens - Earthlings! This revolting group of barbarians have decided to exterminate the Mobanti race, and since the Mobantis have no way of defending themselves, extinction seems to be just around the corner.

However, you, a heroic Mobantette, has decided to take action and transport as many Mobantis as possible to the safety of a bunker, deep below the planet surface where nothing could harm them. The only machine capable of making the journey is the Armourdillo, the only biological tank on Mobanti...

The action is viewed side-on and played over a two-way horizontally scrolling backdrop. The objective is to travel as far left as possible and shoot down the force-field, allowing a survival pod filled with Mobanti people to pass through. When the pod lands, the Armourdillo picks it up and drags it to the right hand side of the landscape - it then automatically rolls into the bunker entrance. The Armourdillo can then be driven back to the force-field to collect another pod.

Throughout the ferrying, Earth craft fly in to attack. If one touches the Armourdillo energy is lost, represented by a bar which shrinks towards a fatal zero. The Armourdillo's armoury comprises an unlimited supply of lethal missiles, capable of destroying an attacking craft.

When enough pods have been dumped into the bunker the action steps up a level, bringing new scenery and more vicious opposition into play.

Why bother to produce something as limited as this? Can't somebody see when a game is mind-numbingly boring and monotonous? Yes, it sounds like youthful cynicism is once again putting in the proverbial boot, but it's not.

Let's take a close look at this product. The objective is to shuttle left and right across a landscape, collecting and dropping off pods, while avoiding the occasional attacking alien craft.

This wouldn't be too bad if the journey was treacherous and exciting, but it's not. The trip across the surface of the planet takes a few seconds and the opposition's leisurely pace fails to provide any excitement.

There's no change in the action from level to level and the whole thing becomes boring after a couple of goes. The sound and graphics are professional, but completely wasted on this inept rubbish.

The graphics and sound are good enough, and the programmer can obviously do his job, so why waste time producing this drivel?

Sound 67%
A short, but competent, tune and decent FX.

Value For Money 22%
Two quid's worth of pretty cosmetics.

Overall 14%
About as exciting as watching a pendulum swing, and just as addictive.

A major advance in instantaneous boredom.