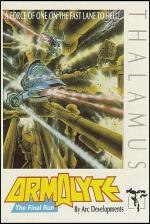 After the Damocles force destroyed the hostile Hsiffan Khanate, the spacial backwater known as Delta became a wasteland littered with disintegrated spacecraft. The few pilots who entered Delta returned with tales of hulks bearing artifacts of tremendous technological advancement.

Many disregarded the stories as jokes or legends, but one man believed. After a particularly crippling Stock Marker crash, Woodward, the chairman of a Terran mega-corporation sought out the nearest bar where he could drown his sorrows. Three Andromedan Wilt-wines later, he found himself being talked to by a bewhiskered bar-fly whose tongue was obviously oiled with liquor. He was an ex-member of the Damocles force, who was court-martialled and drummed out of the service because of his drinking habits. Yes, he said, he had often been through the Delta and seen the hulks and their treasures, but heavily-armed robot defence systems prevented anyone from looting the ships.

Then the man grinned a drunken grin and drew out a metallic cylinder from inside his oily raincoat. This, he told Woodward, was the only piece of Hsiffan technology anyone had managed to bring out of Delta. Woodward has heard rumours of the treasures, and though the wine had long-since taken effect, he was sober enough to know that this was the key to his company's financial problem. He bought the man a drink: he had a plan that couldn't fail.

Yeah, that's what he told you as well, but now it's your butt up in Delta, flying your tiny fighter into the jaws of eight levels of Hsiffan defences, on your own apart from the highly dubious-looking guy they picked to partner you. You have to admit, these Hsiffies may have been treacherous sons-of-bitches but they sure knew how to build spaceships, and these structures are incredible... It's gonna be a shame to blast them to pieces.

And there's bound to be plenty of that - blasting, that is. Woodward had your ships kitted out with the latest in laser armaments and rechargeable super-weapons. But then he would, wouldn't he? He won't make any money if you don't come back.

Hey, what are these crystals hanging in space? Better give 'em a discharge of heavy light... wha...? They just transform into bits of machinery when you shoot them... Look out, you're gonna crash into that one! Aaaaaagh!

Uh? Nothing happened. Wait, look there it is! It's attached itself to the ship. It's a laser unit, and it's patched into your fire control. Try hitting that next crystal with more shots... Now run into it and you've got... rear lasers. What else can you get? Vertically firing lasers, triple lasers, converging lasers, and a battery and a generator to recharge the super-weapon faster. Try collecting two forward-laser units and you get faster fire...

This is going to be easier than you thought... Or maybe not...

We've seen some brilliant Commodore blasts of late, with Armalyte has to take the cake as one of the best to date. Everything about the game is so highly polished that it really does knock the competition into a cocked hat.

Graphically, Armalyte is staggeringly good, with works of science fiction art for sprites and backdrops. Gameplay meets this high standard and whether playing in single player mode with a remote ship or double player mode, the action is thoroughly exhilarating.

In the latter, I particularly liked the way that both players can play either very competitively, bumping each other into aliens and stealing your opponent's weapons before he can get to them, or as a team, taking it in turns to get through tiny gaps in the landscape.

However, I had most fun when playing with a mixture of both strategies, as Maff will testify. Armalyte is just brilliant, and any shoot-'em-up fan should be ashamed to miss out on it.

Well, after saying in the Salamander review that I thought that Delta was the be-all and end-all of progressive shoot-'em-ups before Imagine's release, the Delta follow-up game arrives on the scene and blows every other game of the type out of the water (well, it would if they were in water and not in space).

Armalyte's graphics are startlingly good, with perhaps the best use of shading I've seen on any C64 game. The scrolling is smooth, the sprites and backgrounds colourful and the amount of sprites on-screen is incredible.

Firing the second Superweapon for the first time brought yelps of amazement and enthusiasm from the reviewers as all aliens in the vicinity flew apart (groo). Enough of the graphics, onto the gameplay...

Well, all I can say is it's brilliant. I'm being as quick as I can to tell you how staggeringly good it is so I can have another go! A huge round of applause and congratulations to Cyberdyne systems for such a stunning debut. When's the next game due? I can hardly wait, but playing Armalyte should help fill the gap!

This is incredible! Everything about it is virtually flawless: the graphics are some of the best I've seen on the Commodore, not only for their aesthetic appeal but also for the way they're used on-screen - the combination of threatening metallic space terrain with multi-coloured attack patterns creates an amazing feeling of involvement in the intense action.

And there are so many aliens on-screen at once - add these to a cluttered landscape and you think you'll never get through alive!

If you thought the landscape graphics were good, just wait till you see the end-of-levels aliens - some of them are beyond belief!

It's packed with superb touches, from the evocative Martin Walker soundtrack to the 'intelligent' in-game aliens; the collision detection is perfect - just generous enough to allow freedom of movement in the tightest gaps. If we'd had this in time for the Def Guide this issue, it would easily have been in the top five: it's fantastic!

I can't praise it highly enough - if you miss Armalyte you're missing one of the best C64 shoot-'em-ups of all time.

Graphics 98%
Probably the best looking sprites and backdrops ever seen in a Commodore game of this type.

Hookability 95%
Beautiful graphics and exhilarating blasting action suck you in.

Lastability 93%
Eight lengthy levels to see and the craving for ever larger scores will keep you at it.

Overall 97%
A brilliant blaster whose graphics and gameplay knock others for six.

A brilliant blaster whose graphics and gameplay knock others for six.