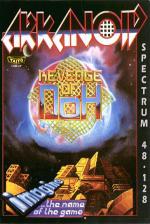 Arkanoid II | What Each Pod Does | Verdict

This is the bit I hate doing. The bit where I'm meant to explain the background of the game to the readers who have just been born, while trying to make it interesting enough not to lose the attention of the other 99% of you who know exactly what's going on.

Still there? Now, Arkanoid was a Breakout clone, Breakout was one of the earliest arcade machines, and entailed bouncing a ball into a wall of bricks.

You had control of a bat at the bottom of the screen which deflected the ball into the wall. Arkanoid took that idea one stage further and gave it a spacey type of "plot". As well as the bat, ball and wall, Arkanoid brought in the capsules, each with different properties (extend bat, disrupt ball into three balls (ooer), transport you to next level, etc). Needless to say, Arkanoid was very, very popular.

So, how does Arkanoid II measure up then? Well, for a start your Vaus pod (that's bat to you, matey) has been destroyed, or something, and you have a new bat, aptly named Vaus 2, which looks exactly the same as the first one. The idea behind the game is the same though.

The original Arkanoid was graphically very sparse. It had no backgrounds and the bricks were just coloured squares. Arkanoid's programmers have taken this point into account and have completely redone the graphics section of the game and, wow, it is a real improvement. The bricks have been redesigned so you can tell the different between 1 hit (coloured squares) and multiple hit (like a top view of a house) bricks. The backgrounds are lovely and patterned, but can be really confusing.

For example, in level one, it is practically impossible to see the ball when playing in colour, yet in black and white there is no trouble.

There are 66 levels in Arkanoid II, and I promise you, all are fiendishly difficult. Indestructible bricks bar your way everywhere and those little aliens still get in the way of your last brick. Very interesting, very frustrating, but still a lot of fun. Still, you will need the pods to help you through, though I must warn you that they have been changed a lot - just have a look at the table of pods on this page.

How many people in the original Arkanoid got to, say, level 24 and said "This is too hard for me, I wish I didn't have to do this screen!" Well Arkanoid II is way up your street, b ecause at the end of each screen, not one, but two exits will open, and you can choose which way you want to go. Very handy that.

All said, a great game. Fun, very easy to get into and frustratingly addictive. Even the legendary Graham "I don't find anything addictive" Taylor was heard to say "Just one more go." Like I say, it's a great game and very, very conceptual (only joking!).

A fabbo sequel that is easily as good, if not, better than the original Breakout-clone Arkanoid.

Arkanoid II | What Each Pod Does | Verdict

A great game. Fun, very easy to get into and frustratingly addictive.