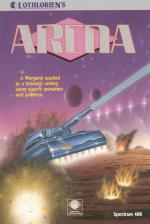 Most strategy wargames feel as though they're written by and for those armchair generals who can reel off the names and addresses of the entire French army at Waterloo. Many a lesser mortal, having spent three weeks reading the rules, only to see his defences salamied by the computer, has wailed, "If only I could do something!" Well, Lothlorien claims to have the answer - Arena.

Take on standard platoon commander type game. But instead of the usual statistical analysis that tells you whether you've turned the enemy tanks into so much scorched scrap, you throw in Battlezone instead. Now you do the fighting so you can wave goodbye to the traditional excuse that you had a lousy luck with the dice.

Great idea, but what about the game? For starters, the strategy map suffer form the same nursery school tanks and landscape that marred Battle Of The Bulge. What's more, the programmers have fallen foul of the latest fad of icon driven commands. Okay, but the idea of icons is to make the game easier to play, not to fill some screen space. And some of the icons will have you frantically leafing through the manual to find which ink blot does what.

Still, when you've got it sussed, this game's great fun. But it just goes to show that smart-alec strategy still can't beat a well-oiled joystick!

When you've got it sussed, this game's great fun.