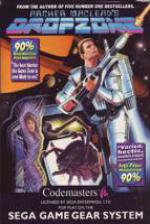 The word 'classic' is bandied about rather too often, but if one game can live up to the moniker, it's Archer Maclean's C64 and Atari 400 blaster, Dropzone. Now it has been updated for the '90s with a scenario which goes on about Ionian crystals and the like. However, at the end of the day, Dropzone is still a Defender clone with the player saving scientists whilst blasting aliens out to kidnap them.

As such, forget complex scenarios and fancy crystals. Dropzone boils down to cluster of small sprites being hoisted away by larger green ones. As a jet-packed spaceman, blast the green guys and drop blue ones into a nearby haven. Repeat until your three lives are gone. And don't forget your smart bombs. It's as easy as a Sainsbury's recipe...

Game Gear Dropzone features all the monsters made famous in Archer Maclean's original. In addition to the customary green baddies, there are red mutants which chase the player around the screen; lightning clouds which unleash deadly bolts of electricity and seemingly innocuous balls which, when shot, release a pack of worms which are very hard to hit.

I've played every version of Dropzone there is, and for me it's a game that never dates. Forget special moves and huge bosses, Dropzone is just a fast-moving shoot-'em-up set across the same bland planet - but there's something about it which proves immensely playable.

It doesn't take long for the aliens to start speeding up, and Codemasters have managed to faithfully recreate the C64 game's brilliant control system, resulting in a stunning conversion.

I have to admit that I'm not a fan of the new fat sprite, but for sheer seat of the pants addiction, Dropzone can't be beat. Perfect Game Gear fodder.

Never has a game been more suited to its format. Dropzone is what Game Gears are made for: instant, addictive gratification. Really, there's no distant goals, no complex interface to learn - just pick it up and play instinctively.

Also, think yourself lucky. Fifteen years ago, you required a few hundred pounds and three hundredweight of cabinet to enjoy a game of Defender. Now the miracle of modern technology and Codemasters (many say they are one and the same!) brings it into the palm of your hand.

Probably the most fun you can have with five fingers.

Graphics 66% The same planet repeated, and tiny and uninteresting sprites.

Lastability 87% The alien patterns get busier and they put up a really tough fight.

Value For Money 90% One of the best blasters the Game Gear is ever likely to see.

Overall 90% A welcome and very close conversion of the C64 classic. The best blaster available for the 'Gear.

A welcome and very close conversion of the C64 classic. This is the best blaster available for the 'Gear.