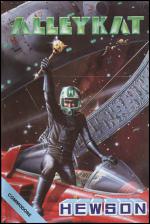 Alleykat is the sport of the future, a chance for a select few of the many millions of interstellar pilots to achieve fame and fortune. A chance to become a real hero.

Until recently, interstellar sports have been in a state of complete chaos with no properly organised competitions. The only thing really considered a sport was the highly dangerous inter-planet racing events set up by the pirate TV stations.

The live action often produced spectacular crashes and many pilots lost their lives. As the fatalities grew the ratings soared. The incidents grew and grew until the authorities were forced to clamp down following a terrible accident on the Jupiter race track.

After an in-depth inquiry it was decided that the sport must be reorganised to make it safer for the competitors. So, eight 'official' race tracks were built to provide venues for the races. The race tracks are custom built for space racing and comprise of a course built around the inner surfaces of a large space wheel. Each track has its own form of 'landscape', designed by different architects to give the races a variety of racing formats and the racers a variety of racing problems. A series of 'gravo craft' were also designed specifically to cause problems to Alleykat racers during the competitions and add controlled thrills and spills to the sport.

The Alleykat racing craft is swing-wing, giving two advantages: when the wings are swept back extra speed can be gained, and when the wings are out the advantage is extra firepower. It's up to the racers to decide which facility suits their racing tactics best.

The game is set at the very beginning of the fifth season and you play the role of an up and coming AlleyKatter. All your finances have been poured into the construction of your craft - consequently, you have no money and have to earn enough cash to see you through the season. This can only be done by winning races.

The racing season is split into several galactic 'months', each month having progressively more difficult and challenging races.

Naturally, the more difficult the race, the bigger the prize. But as the prizes increase, so does the entry fee.

Each race is run over a vertically scrolling screen, just you versus the landscape and gravo craft.

Most gravo craft are equipped with lasers, but some, like the feared Katerkiller, are totally maniacal and try and crash into anything that moves. Luckily, the Alleykat race craft are fitted with lasers which can be used to dispose of the marauding meanies, adding bonus points to your race kill tally.

By using a menu you can select which race you wish to enter. However, once you have raced or skipped races you can't go back and run them again. There are several different types of Alleykat race formats, such as slalom, dodgem, demolition, survival, speed trial and endurance. Each race requires a different tactic to gain a big racing bonus - for example, in demolition races it's profitable to smash the landscape with your blasters. All these tactics have to be learned and it's useful to find out which races are best suited to your style, so you can enter them and stand more of a chance of winning.

To win a race, you must complete a set number of laps. If you don't then you are awarded points for the different things you did during the race (amount of kills, special bonuses, etc) but you don't get any money. There is only one way an Alleykat racer can be brought to a halt and that's when it runs out of energy, either by crashing into landscape features or gravo craft.

Fortunately, energy can be picked up by running over the 'E' symbols littering the landscape. The more symbols picked up the better the chances of surviving an accident. When the energy becomes low, the ship flashes and an audio warning sounds.

AlleyKatters can enter solo or as a team. But the ultimate aim is to win the Alleykat trophy, an artifact valued at 10,000,000 guineas which the winner can keep for a year.

I like Uridium, and Paradroid was even better. So it was no surprise to find myself really getting in to this one I've never been a pure shoot-'em-up fan, but the graphics and strategy on this one put it above the run of the mill Rambo meets Commando meets who cares who wins. The controls take some getting used to, but after a while they become natural. It's total concentration time as you try to suss out what is coming at you, what you're about to plough into, and what to shoot up. The graphics are really pretty, especially the crashing effect which is great and will no doubt be copied by everyone.

There are so many innovations here, like the idea of laps (blast away in the first one, then get the old foot down) and all the different bonuses. This is no mindless shoot-'em-up, it's the business and my tip for the Xmas number one.

Alleykat is a quality Braybrook game... almost. The presentation is first class (the psuedo Atari colour cycling is used to good effect). The graphics are detailed and very effective (the backdrops and crash sequence are very nice). The sound effects are functional (although reminiscent of those in Paradroid and Uridium at times) and the title screen music is reasonable.

But the game itself, well, I'm not so sure. I didn't enjoy playing it; in fact, to begin with I never really had the incentive to play. It was worth persevering with Paradrold, but I don't feel the same about Alleykat. No matter how many times I played it, it didn't turn me on. It didn't feel good and I never felt threatened or stimulated - previous Braybrook offerings have always had the opposite effect.

Alleykat isn't 'racy' enough to be a race game and hasn't the qualities of a good, fast action shoot-'em-up. The backgrounds are cluttered and restrict fast and exciting movements (unless you completely demolish the scenery - yawn), thus making the pace, on the whole, very slow.

The (essentially) small playing area doesn't help much either - although this is due to the size of the vertically scrolling screen, so it can't really be helped (unless the game scrolled horizontally). A slow game is all very well if there are a lot of interesting things to do, but in Alleykat there is little 'active' variety to provide lasting entertainment.

Admittedly, there are a multitude of different tracks, all graphically varied and offering a great deal of challenge. However, I found the racing process too tedious to be worthwhile. If there was less detail then the race tracks would look too sparse - at present they look good but don't work well. I'm disappointed with Alleykat, although to be fair to Mr Braybrook, such innovative 'acts' as Gribbly's Day Out and Paradroid are hard to follow. Still, Alleykat is a fairly mediocre game - especially by Braybrook standards - with little to it other than some very pretty graphics and impressive special effects.

AlleyKat is a quality Braybrook game... definitely. There's quite a lot more to the game than just getting to the finishing line - you have to work out which of the races are best suited to your tactics, build up your energy storage capacity and earn enough money to keep you in the game. The backgrounds are fantastic (not bas-relief stuff as most people expected) and range from barren and blasted 'scapes (where you can really burn along) to the completely packed out forests (where you have to first clear a path before going at speed). The main ship sprite is great (especially the little landing lights which blink on and off during the game) and the gravo craft sprites are absolutely superb.

The title screen is dead pretty with truly excellent Atari-esque effects, but the music is a bit iffy. The in-game effects are great, although they do tend to be rather reminiscent of other Braybrook games at times. I found Alleykat incredibly addictive and returned to it time and time again for another go - you just want to keep going! If you want a superlative same which offers speedy and immensely addictive gameplay along with a hint of strategy, then look no further than this ace program.

Sound 78% The spot effects are good, but very reminiscent of earlier Braybrook games, and the title screen tune is rather naff.

Hookability 79% Very demanding - difficult and time-consuming to get into.

Lastability 90% The large number of tracks and race formats will keep an avid AlleyKatter enthralled for many months.

Value For Money 87% Could prove an expensive mistake or a worthy purchase...

Overall 89% A lot of disagreement amongst the team - try before you buy.

There's a lot of disagreement amongst the Zzap team - try before you buy; either an expensive mistake or a worthy purchase.