Published in The Micro User 6.09 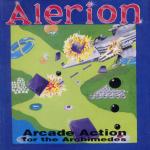 Vertical scrolling shoot-'em-up games have been available for a long time on 16-bit micros and have reached the stage where new ones invoke yawns of boredom. But in the Archimedes field only two have become available; the first - from a group of students - was certainly a creditable effort. Now we have a professional one from Dabs Press.

Booting up the game is the same as for any BBC Micro - Shift-Break - but if, like me, you usually sit with your finger on the Shift key waiting for something to happen, you are out of luck. When you take your finder off the program starts to load.

An option screen is loaded which gives you a choice of a demo, changing the key selections and playing the game itself. Each can be selected either with mouse or keyboard.

The second option shows the default settings and a representation of the keyboard: you use the mouse to click the keys you want, and if you choose the same key twice the program defaults to the standard.

Selecting the play option causes a fairly duff title screen to load followed by the main game code. During the time between games you are presented with the high score table, a list of all the targets and a page of information about spikes, H and F bases. You have to dodge the first, the last H base you fly over becomes the start point for your next life, and landing eight shots on an F base gives you one FAC - a jamming system that makes your ship invisible.

Pressing Return takes you into the game proper. The default keys are fairly standard: Z/X for left/right movement ] and / for accelerating up the screen and sowing down to move back. Pressing Return gives you very strange air-to-air missiles and the Alt key produces air-to-ground shots - crosshairs are positioned a third of the way up the screen from the ship itself and that's where any ground fire will hit if you use it. Pressing the spacebar activates the FAC when you've hit the F bases enough times.

You have a plan view of the terrain as it scrolls from the top of the screen and the landscape slowly unfolds. Strange objects move down at you while others move from side to side. These are dangerous and have to be eliminated with the air-to-air shots - but just keeping Return pressed satisfies that.

The real problems come in the form of ground-based rocket launches that literally erupt from the terrain and begin to fire black missiles at you. They aren't very accurate, but at first, what with dodging them plus everything else going on, you'll soon succumb and lose a life.

The launchers can be dealt with by your ground missiles - but you can't fire both types of missiles at once. One thing I noticed was that not all the ground bases fire until I knocked out one of the others, so there's no point in gratuitously hitting every base, as it only activates others. There are several levels, but they are all strung together without a break. At higher levels there are vicious floating balls that home in on your.

My main disappointment with the game is its scoring system: The highest valued objects - Flippers - appear on the first level only. This means that to get a high score you just hit everything in sight without going over an H base. Then, when you do get killed, you restart at the start of level 1 with another set of Flippers to knock out.

The sound is fairly good with plenty of digitised explosions and there is some speech too, telling you when you've flown over an H base or moved to the next level. But there's nothing spectacular and no music.

The sound is fairly good with plenty of digitised explosions and there is some speech too, telling you when you've flown over an H base or moved to the next level.