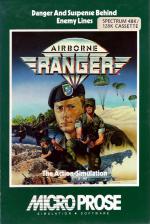 Tora Tora Tora! Scream and die, right-wing imperialists running dog lackeys of the bourgeoise capitalists! Wait a minute, that was the start of my review of Fernandez Must Die making an unscheduled reappearance. Well, if software companies can churn out the same ideas over and over again, why can't reviewers?

Airborne Ranger is not exactly what you'd expect from Microprose, who is famous for extremely detailed and authentic simulations of helicopters, and games with vast manuals. Airborne Ranger, though, is little more than a complex version of Commando, with a series of different missions and types of weapon to make it play a bit more like a serious simulation. Having said that, I'm not saying it's BAD as such. All the detail and background is quite exciting.

There are 12 missions to complete, ranging from sabotaging enemy bases, to blowing up planes, to kidnapping enemy officers. There are different types of terrain - temperate, tropical, arctic and so forth - and many different types of ground features including pillboxes, trenches, barbed wire, landing fields, communication bases and the like.

Your first task is to select your control method, then load up one of the 12 missions from tape. After studying the mission instructions, which you must follow closely to complete the level, you are shown a scrolling map of the landscape as your supply plane flies down it. You can drop two supply pods at any position on the map, then, on the signal, parachute yourself into a safe landing position. The screen then changes to the main combat routine.

Your little hero makes his way around the screen, which scrolls in all eight directions. To the left is shown your fatigue rating, number of wounds and amount of first aid in your pack, along with the time remaining for the mission. In the right is your weapons supply, and currently selected weapon. Using the number keys (and keyboard overlay supplied) you can select weapons including time bombs with three different lengths of fuses, grenades, knives, rockets, or your trusty carbine. Your aim is shown by a small cursor in front of you, but in the absence of decent sound effects or clear explosion graphics, it's difficult to tell what you shot, and what is still a threat. Dangers include enemy troops who trot towards you firing wildly, machine guns mounted in pillboxes, and landmines.

By picking up your supply pods you can restore your first aid status and ammo supplies. You can also choose to crawl along (slow but safe), walk (more risky, but restores your energy) or run (fast, but saps energy). Graphically fair, reasonably complex but rather difficult to control. Airborne Ranger falls a bit uneasily between simulation and arcade game. See before you buy.

Interesting but not staggering military simulator.

Graphically fair, reasonably complex but rather difficult to control. Airborne Ranger falls a bit uneasily between simulation and arcade game. See before you buy.