1st May 1984
Adventures Of Saint Bernard
By Carnell
•
Spectrum 48K 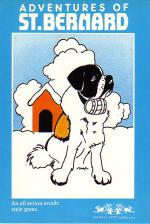 Here's the chance you've all been waiting for - become a St. Bernard dog called Brandy and rescue your mistress from the clutches of the abominable snowman. The scene is some northern wastelands where he lives a rugged and dangerous existence among the mountains and ice fields.

In stage one, you must make Brandy run along, but he is beset by black wolves from both sides. Turning him to face the attacking wolf at the right moment will result in the wolf 's death. Whichever direction he runs in, a wolf will attack from behind. After seventeen dead wolves Brandy moves to the next screen where he has to jump over holes in the ice through which walruses are rearing up. Stage three sees Brandy climbing up to the snowman's lair, leaping over falling snowballs and fighting off the wolves again. Stage four, and we are nearing the lair. The snowman jumps up and down, causing Brandy to slip down the mountain. In stage five there are more pools of water, a walrus and skating penguins.

'I was quite surprised when a 3D view appeared in a way that I only noticed after about 5-10 minutes playing - the foreground moves much more quickly than the background. Brandy runs fairly well for a dog with only two legs and a tablecloth looking tail! A transparent walrus takes the theme of ice and cold a little too far, and they are also very difficult to jump. After a short while the entire game becomes repetitive and boring.'

'The graphics are nice and big and reasonably well animated, but I had terrible trouble getting the dog to jump a walrus. It takes off with encouraging energy, and then seems to hover in mid-air, waiting for the beast to come 'up underneath it. The skating penguins are very good. This isn't a fast game, and the main irritation is in the very slow response to the keys, intended presumably, but not very good as it just frustrates in the end.'

'This is quite an original idea with quite good graphics but all in all, not quite good enough to appeal for very long. It takes ages to get through a stage considering what's happening in each one, and so soon becomes uninteresting.'

It takes ages to get through a stage considering what's happening in each one, and so soon becomes uninteresting.