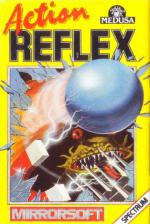 Action Reflex is one of those games that is entertaining without being exciting. Technically there is nothing special to say about it, it boasts no new and impressive graphic routines, it doesn't feature artificial intelligence (however artificially) and it isn't going to win any prizes. On the other hand, I found it infuriating and had a severe attack of the 'just one more go'.

A bouncing ball looking suspiciously like the Amiga demo is the heart of the game (OK, it doesn't look much like the Amiga demo but it has got a checkered pattern on it). Learning to control the ball, which acts just like you would expect a bouncing ball to act is the art of the game. The challenge is provided by a series of odd but vicious traps which deflate both ego and ball simultaneously.

The ball movement is a subtle affair, bounce levels can be controlled quite precisely but don't drop immediately to zero when you wish them to. In other words, the super leap you build up to help you jump the tall funny statue type thing in one screen may also hurl you uncontrollably into the deadly fire pit in the next screen - get the picture?

Sound is rather minimal, just enough to give the audible impression of a bounce.

I do like the ideas behind the graphics, there are some touches of gloriously eccentric violence a la Road Runner. I particularly like the hidden boxing glove which springs from the floor and punches the ball straight into the prongs of what looks like a pitchfork.

That's about it really, the key to the game is learning how to work those bounces and learning what bounce patterns are required between certain screens. Nothing amazing but I liked it.

No prizes but rather entertaining. The sort of game that may still be worth playing this time next year.

The sort of game that may still be worth playing this time next year.