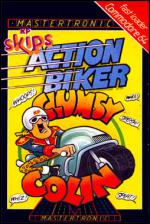 Commercial television comes to computer screens. While this little gem of a program is loading, you not only get the expected litle screen but also a tasteful ad for KP Skips. If this helps to keep Mastertronic games at £1.99 then I won't complain (carefully avoids puns about nibbles and bytes and get on with the review! Ed.).

The idea is to play the role of Clumsy Colin as he tears about the town on his motorcycle picking up spare parts. Some of the spares are really useful items adding extra speed and power to the bike and if you fund all the parts you can enter the drag race at the end of the game.

The graphics scroll through a full 360 degrees as you steer Colin around the various parts of the town. There's a building site, a fairground, several lakes, a garage and a race track all superbly represented in high lateral perspective 3D.

Only one 'find' is shown on the map at a time. As more and more objects are collected they become harder to reach by being placed on the scaffolding of the building site or the roller coaster.

Because the bike can be facing in any direction on the screen, selecting left or right turns can be difficult. I was surprised to find how quickly these orientation problems can be overcome and soon found myself zooming around like an urban Barry Sheene.

Even if this was not a bargain price game I would recommend buying it, at this price I demand that you do!

I would recommend buying this even if this was not a bargain price game... At this price, I demand that you do!