﻿ Ace Of Aces (US Gold) Review | Your Sinclair - Everygamegoing 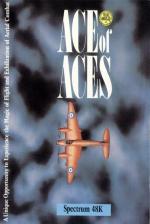 Ace Of Aces is an airborne romp around the skies over Europe in the early '40s, where you can exchange lead with the Jerries in an exciting dogfight to the death. Exactly what the dog is doing there, I dunno, but that's not important right now...

You've got to seek and destroy some trains, and boats and planes (sounds like a cue for a song) in Germany, and escape back to Blighty in time for tea and crumpets.

There's lots to look at in your Mosquito. Ooo, there's lovely full screen graphics of your front view, and, er, the left and right views out across the wings... handy if your engines catch fire, 'cos then you can turn on the jolly old extinguishers... and of course you can look out of the bottom of the aircraft through the bomb doors, y'know, give the old RAF coiffure a riffle in the airstream. And in the back of the plane you've got a map of Europe, a sort of Mosquito drivers Michelin Guide, where you can see the targets and fly to them. Oh yes, you've got to watch out for those cursed Boche fighters, the old Messerschnitzels, who'll strafe the living wotnots out of you d you give 'em half a chance! So it pays not to spend too much time inspecting your footrest, or you'll end up as a roundel sticker on some Baron's fusilage.

So if you fancy dicing with death. or even diced Jerries, then this is the flight sim/shoot-'em to shreds for you, old bean!

If you fancy dicing with death, or even diced Jerries, then this is the flight sim/shoot-'em to shreds for you, old bean!