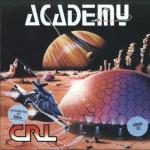 The executive version of Tau Ceti, Academy, has finally reached the ST. As a trainee skimmer pilot, you enrol in the galaxy's top training school, the Galcorp Academy for Skimmer Pilots - GASP.

At GASP, you will learn to customise your own skimmer, by selecting its physical characteristics such as well as what weapons and displays to include.

You will also participate in many classes, so secret only qualified pilots are told about them.

Once you graduate from GASP there's twenty real-life missions just waiting to get you killed!

The ST version of this CRL classic is essentially the same as its 8-bit predecessors, but with a host of graphical bells and whistles to tart it up for its first 16-bit outing.

If you fancy a thinking person's arcade game, then Academy is for you.

If you fancy a thinking person's arcade game, then Academy is for you.