﻿ A View To A Kill (Domark) Review | Zzap - Everygamegoing 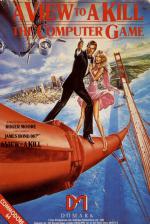 James Bond hardly needs any introduction; the only surprising thing is that this should be the first game to be based on Ian Fleming's superhero. A View To A Kill is a three-part adventure based on the three main action sequences from the film of the same name.

The plot of both film and game is quite straightforward, involving Bond in battle with a super-baddy who has delusions of grandeur and seeks world domination. This time, the evil one is called Max Zorin and plans to blow up Silicon Valley with a thermonuclear device, so that he can corner the silicon chip market and put every other computer company out of business.

The last two games require a code which is given on the completion of the prior task. As the code also controls information about your performance in the game just completed, the best way to improve your performance is to play each game until you have done really well, before moving on to the next section.

A View To A Kill offers either the famous James Bond theme music or a version of Duran Duran's single. The music was programmed by Tony Crowther for an undisclosed but enormous sum of money somewhere over the 10K mark. More sound effects are provided in the form of speech, phrases such as 'My name is James Bond' and 'Dammit'.

In play the objects, which help make up the adventure element, are selected or dropped by scrolling them past a pointer in the window. When an object is selected, it may be used according to the instructions displayed in the lower part of the window, which allows for selection of commands like SEARCH, DROP, USE or GIVE.

Part One of the game is set in Paris. Bond has been briefed by 'M' and is having lunch with a fellow agent, when suddenly his colleague is killed by the ruthless assassin, May Day. Bond chases her to the top of the Eiffel Tower and watches in amazement as she leaps off the top (narrowly avoiding some idiot pop singer who gets in her way), and parachutes to safety. Commandeering a taxi at the foot of the tower, Bond attempts to guide it through the streets of Paris to the spot where May Day will land.

Using the controls, you have to guide the taxi to May Day's dropzone. The main screen provides a 3D view of the road ahead, while the lower part displays a map of the immediate area. You have a radio tracker, which gives an indication of May Day's position. During round the Paris streets you encounter many hazards, and driving the wrong way down one-way streets will have the police on your tail, setting up road blocks or maybe taking a few pot shots. And watch out for the manic Parisian drivers - too many collisions and your car will stop working.

San Francisco provides the setting for Section Two, the City Hall to be exact. Bond and his girl, Stacey, have found Max but he has turned the tables on them by trapping them in the lift and, because he's a nice sort of guy, setting fire to it. Bond has escaped from the lift, but now you must guide him. He must rescue Stacey and escape from the burning building.

As before, you must collect objects to help you with the task in hand. The fire is now taking hold and time is of the essence. Your progress and that of the fire is shown on a front elevation of City Hall displayed at the base of the screen. A thermometer on the right of the screen lets you know when things are getting too hot.

To complete the final section of the trilogy, set in a mine, Bond must enlist May Day to help him get to the nuclear device by convincing her of the error of her ways (he's always doing this of course). The geiger counter (which you might have had the foresight to collect on the previous game although it seemed useless at the time) shown at the top right of the screen will help you locate the bomb, and while there's a great deal of jumping to do, you must again be on the look out for useful objects.

The mine is a huge maze but you can examine the area immediately around Bond and so avoid jumping off a level into oblivion. When the bomb is located, it's advisable to get it defused as fast as possible so that you can make it off with May Day into the sunset.

From the sounds I heard on the music demo tape and the previews I saw, I had high expectations which were sadly shattered (and quickly) when I saw the opening sequence unfold. It appears that James has been on a diet since I saw him on the screen last, strict diet in fact, since he looks like a whittled matchstick. I was impressed with the way he body-popped across the screen to the sound of Crowher's musical massacre (it didn't sound THIS bad on the demo tape - it was almost as thin as James! It's enough to make Henry Mancini turn in his proverbial grave), and was so shocked by the extreme loudness of James' weapon as he turned and pointed it at me. The three games turned out to be as thin as James in the title sequence, but not as powerful as his weapon. The first was a simple 3D maze variant that soon palled due to awkward control and weak content. The following, simplified arcade adventure was the better of the three games, but was nothing to rave over as the whole thing was very sparse and lacked much in the way of anything interesting to do. The feebly disguised Impossible Mission variant failed to inspire me to play for much longer and I willingly left the 'game' to write this comment. If produced correctly, a game based around the antics of James Bond could be something really special. Unfortunately, no-one has done this yet - Ah! I live in hope...

After the mega publicity I thought this game was going to be something really special. Unfortunately it isn't. The game starts with the classic James Bond film opening sequence, which I was led to believe it was superb. It looks really good, until James Bond walks on. It doesn't look like James Bond, rather like a stick insect holding a can of coke. Never mind, they tried. Whilst this is happening the James Bond theme tune is going, it isn't too bad but sounds a bit reedy. The music during the game is a nice tune (I liked the record) but hasn't been very well converted to the C64, suffering from unimaginative voices and lacking in a channel. The game itself is very boring, starting with a poor version of Rally X, it reverts to a Mastertronic type arcade adventure, and finally an incredibly pathetic Impossible Mission attempt. Highly disappointing considering its hype.

If you've seen Impossible Mission (you have, haven't you?) and hoped for an equally good secret agent game, you would be sadly disappointed by A View to a Kill. The graphics gave a general impression of being crude, and I thought the three sections were somewhat less than gripping. Three quite different games together in one package ought to make up something reasonable, but View rarely manages to rise above the generally average. The facility to play any of the games in isolation is useful, but once the problems have been tackled a few times, the game loses much of its attraction because there simply isn't enough behind it to keep the player gripped.

Sound 66%
The music's been duffed up.

Hookability 53%
Too simple to get hooked on.

Lastability 89%
Overall impression fails to inspire much play and the games aren't well enough throughout to keep you at it.

Value For Money 35%
Three different games represent poor value where one really good one might have been better.

Overall 36%
A powerful idea that seems to have missed its point.

This seems to have missed its point. Three different games represent poor value where one really good one might have been better.