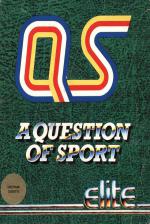 A Question Of Sport

"Which Australian lady Tennis Player caused a rumpus at Wimbledon when her knicker elastic snapped?", "Who put seven past Bristol Rover in [some text missing] and "Which London-based snooker player was recently voted BBC sports personality of the year?".

You don't know, do you? Well, I do, and I can tell you that the answers will be given to you somewhere in this review - so you are going to have to read it now, ha!

Yes folks it's A Question Of Sport time again - introducing Bungling Bill Beaumonth, David 'the yawn' Coleman, Ian Botham and all your other favourites in this computer conversion of Britain's most popular TV sports quiz program.

In actual fact Elite offer viewers of the computer screen a new hero - one Steve Wilcox - Midlands lad, Lotus Elite driver, and part owner of Elite software. Yep, 'thrifty' Steve Wilcox as he is known in the trade makes a starring appearance in his own game - and why not?

His specialist subject is soccer which is strange considering he is a Walsall supporter. But then - life can be strange. The other guests are pretty strange too. I haven't got a clue who any of them are. Bill and Ian are clear enough though.

The game follows the TV show very closely - the quiz being split up into six rounds.

If you have never seen the TV show (Where you been, mate?) the rounds are: Pictureboard - here questions are asked individually to each team member. The players choose a box from the numbered grid. These squares then flip revealing a symbol representing a sport. There are a wide range of sports including soccer, cricket, horse racing and tennis with a mystery question mark symbol for a randomly selected sports question.

If you get the right answer you notch up two points; get it wrong or run out of time and your opposing side get a crack at the question to earn a bonus point.

The questions are always multiple choice - the player making his election by moving the cursor to the required answer. The time factor is represented by a circle which colours in to the sound of a loud buzz - reach for the volume time.

Home or Away is another individual round in which players can choose either their specialist subject - for one point or an 'Away' subject for two points. The same bonus and time out rules apply here as they do in all rounds.

What Happened Next is just what it says it is. You choose the answer which completes the event. This is one aspect of the game that doesn't convert particularly well. The problem is you tend to forget the exact wording of the question by the time you get to a bonus attempt if your opponent has failed. It doesn't quite work without the visuals.

Again Mystery Personality is slightly flawed as well because if your opponent guesses wrong you can almost get to the right answer by a process of elimination.

The Quick Fire round was the best for me. A head to head against the computer or a friend in which you race to make the correct choice of answer from the ones listed. Excellent fun, this. The final round is another bout of Pictureboard - asking the questions in the squares that remain.

The instructions state that Elite have attempted to minimise repetition of the questions by stacking them in five blocks - the idea the computer prompting you to load a new block of questions from time to time. Of course, there is a finite number of questions that the disk can store - so that eventually you are going to start recognising certain questions. This is unavoidable if you think about it but it makes the computer game no different to the original board game - which is why there is a booming trade in expansion sets for board games. Will there be addition expander disks for A Question Of Sport?

Director of the company and former C&VG employee Bernard Dugdale said: "We are looking at a number of expander packs - including further question disks asnd possibly specialist subject disks on say soccer or cricket."

So how does it play and is it worth getting? I would say yes, if you are a fan of the programme, like quiz games in general, or the type of question coin-op machines you find in pubs. I do - I love 'em as my bank manager will testify.

A quiz game is a difficult thing to undertake. Surprisingly, two companies have attempted it now through the medium of a licensed quiz - Domark with Trivial Pursuit and now Elite with A Question Of Sport. It's dead simple and doesn't have any bells of whistles to speak of - even on 16-bit - it's really playable though, you'll find yourself having just one more go, which is exactly what I am going to do now I have finished this review.

OK OK I know, you want the answers to the questions, I haven't forgotten. I have been a bit naughty though because I made the one up about the Australian lady's knicker elastic. The others were legitimate enough though - Bristol City and Steve Davis of course.

A Question Of Sport

A dead simple quiz game... It doesn't have any bells or whistles to speak of but it's really playable though. You'll find yourself having just one more go...