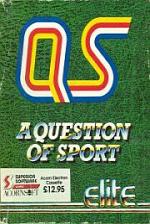 A Question Of Sport fans, and no doubt there are quite a few, can now have a bash at this popular quiz game in their own homes, courtesy of Elite, Superior and Acornsoft - it's a crowded loading screen with all those logos.

You are soon greeted by the familiar faces of David Coleman, Bill Beaumont and Ian Botham, and you can choose to be either Bill or Ian. Other options include a one or two player game and a choice of 25 question files. You can choose your specialist subject and two team mates from a board of well-drawn faces.

As in the television game, there are six rounds: Picture Board, Mystery Personality, Home or Away, What Happened Next, Quick-fire and then back to the Picture Board to finish off.

I expected the Picture Board to be similar to the television, however, this would be asking too much of the Electron's graphics. Instead, each square flips over to reveal an icon representing a sport.

A speech bubble appears over David Coleman's head and the question scrolls rapidly from right to left. Four answers are displayed multiple-choice fashion and you must choose the right one within a time limit. If you don't, or you get it wrong, the question is passed over to the opposition.

The Mystery Personality round is the same in name only. You are given three clues, one at a time, as to as person's identity. Three points are awarded if you get it at the first clue, two at the second and one at the third.

The third round tests your specialist knowledge, or you can choose to play away and answer on a foreign subject. The fourth round is What Happened Next? Here an incident is described and you have to supply the answer.

The penultimate round is Quick-fire Questions - everyone with their fingers on the buttons and the first to answer correctly gets the points. Finally it's back to the Picture Board to finish off the remaining squares.

The graphics are pretty good, with recognisable faces and well chosen icons, but there isn't much sound to speak of. If you like general knowledge, sport and trivia games you'll probably like this too. It's a fun game for all the family.

A Question Of Sport is a fairly good attempt at reproducing the excitement and fun of a TV quiz program. However, the game won't appeal to everyone, and there is a limited supply of questions, though it should take you quite some time to work your way through 25 files.