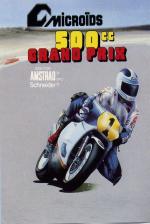 Grand Prix is a split screen, one or two player driving game designed to appeal to arcade players looking for a little extra depth.

As with Super Cycle, your first task is to select a skill level which affects cornering ability and computer rider behaviour. You can also choose between the one and two players variations, each of which can be played under practice or full race conditions.

There are twelve international grand prix tracks to choose from, each with its own set of quirks and problems - novices are advised to start with a track like Silverstone.

In race mode there are four or five computer racers (depending on whether a one or two player game is selected), making a total field of six riders.

Control is the same as Super Cycle but the program's response is far more sluggish with an almost unacceptable gap between moving the joystick, say to the left, and seeing your rider actually lean and turn that way.

Although Microids have performed miracles on the Amstrad, if you want a really playable two player racing game and don't mind the extra two wheels, look seriously at Pitstop II (Epyx/US Gold) before picking up the keys to this one.

Although Microids have performed miracles by converting this to the Amstrad, I would suggest you look seriously at Pitstop II before picking up the keys to this one.