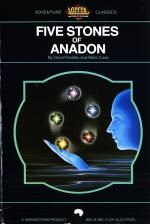 The last Softek adventure I reviewed - The Eye Of Zolton - was very good. So it was with some interest that I loaded in The 5 Stones Of Anadon. I think that if anything, this is a better adventure than the last one.

Your local wizard is dying and it is up to you to recover the ring of five stones that are scattered about the kingdom. You start your quest in the wizard's house surrounded by a plethora of objects - a dust-pan, a broom, a fountain pen, keys, a crowbar and gloves to name but a few.

You discover the wizard, though why anyone should lock him in his own bedroom is a mystery to me. You soon come across a cemetery with grave advice and a cellar with a rather cross ghost. Further explorations lead you to a dragon and a black knight. The solution to the problem posed by the dragon requires knowledge of an old adage about making cakes. The result is invisibility.

An inconsistency here however is that while you are invisible you can get past the dragon, but the knight can somehow still see you.

One other thing that came as a surprise is that as the wizard weakens, the stones become invisible. Luckily though, you can still collect them if you know where they are. You are also limited to a set number of moves after the stones have become invisible because eventually the wizard dies and then the game is over.

One slight niggle I have is that you have to QUIT in order to LOAD a saved position. It is all too easy to load in the wrong data file. It isn't difficult to implement this and I am surprised Softek has not done so.

Aside from that we have an adventure that is a joy to play. Most of the most frequently used word parts are tokenised and thus, although written in Basic, the adventure is fast.

Other BBC/Electron Game Reviews By Merlin

A very good, attractively packaged adventure that is highly recommended.