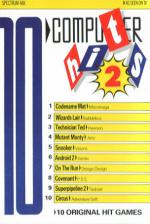 Ten games on this pack but almost everyone of them better than any of the programs on 30 Games. With the exception of Circus which is a graphic adventure originally produced by Adventuresoft, (who had a good reputation for original ideas and compelling plots - Circus is no exception) all of these games are of the arcade 'bash 'em to bits' sort.

Best of the bunch is Codename Mat which is a sort of early Elite: it lacks the 3D graphics but it looks good nevertheless, using solid sprites of various sizes to produce the illusion of space battle through the cosmos. It's not just zapping, when your spaceship gets wrecked after a particularly heavy battle there's a highly dramatic section where you search frantically for a place to make repairs before your fuel runs out. There are also strategy elements as you issue commands to other parts of the spacefleet, organising them as best you can to defend the various planets under your care. Playing this one again was like listening to an old record that you had forgotten how much you enjoyed.

Android 2 by Vortex - a follow up to. astonishingly enough, Android 1. It features a robot you control whose lack of facial expression and faintly neanderthal appearance reminds me of the robot in The Day the Early Stood Still. The setting is a 3D maze, chock full of assorted insect-like baddies, your robot must survive the maze and rationalise the paradox zone. Lots of lasers, nice scrolling backgrounds and that faintly daft robot, a compelling game.

Of the rest Wizard's Lair is a sort of Atic Atac (what is that word that means rip off but doesn't attract writs for libel?)... er, tribute.

Technician Ted was one of the few Manic Miner style games that was more than a poor copy (apart from anything else it's very, very difficult).

Mutant Monty is more multi-room maiden rescuing featuring monsters called Quantum Leapies. It's collect-and-dodge of the most tedious sort. Snooker is Snooker - quite a good version of the real thing done originally by Visions.

Of the rest Superpipeline 2 is the sort of game some find extremely addictive - keep the water flowing through the pipes by running around fixing the leaks, watching out for the workmen and the killer drills. The word wacky springs to mind. The Covenant by PSS was a highly regarded release in its time - in the Ultimate tradition, big graphics, lots of colour, lots of screens. It's all about seeking 64 parts of a parchment strewn about a gigantic labyrinth of caverns. I was never that keen on the game which seemed to lack variety but it's well programmed. Finally On the Run is a maze style game, you collect deadly flasks and avoid the mutants. Seems a bit familiar though, it's a wonder there are any mutants left.

Computer Hits 2 is quality rather than quantity and with nearly ten games you might really want to play and play again. It's excellent value.

Excellent quality... 10 Computer Hits 2 is quality rather than quantity and with nearly ten games you might really want to play and play again.
Logout