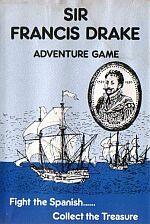 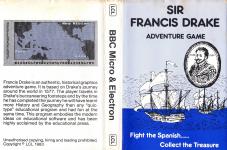 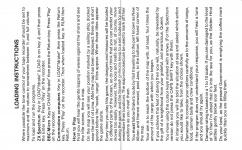 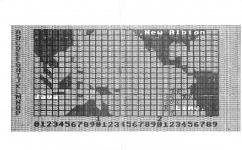 Documentation is poor, keywords that are needed are not given but nonetheless at its lowish price - about six pounds - it could be considered for primary schools. Read Review

First you will hear a gentle lapping of waves against the shore and see the title screen, then a map.

On the map you will see your position marked by a sailing ship, docked near the port of Lima. After the map has been displayed, there is a short period before the "week, cargo" titles appear. When these titles appear the game starts.

Every time you play this game, the dangers and treasures will be located in different parts of the ocean, so do not think that you can predict your moves too easily. However, the rocks and reefs do not, of course, move during the game, and the Spanish galleons keep to a set route so try and remember their locations. The map enclosed can be used to mark off their positions as you meet them.

You must follow Drake's route by first travelling to the port known as New Albion and thence onward, past Java, to the bottom left hand corner of the map.

Your aim is to reach the bottom of the map with, at least, four times the amount of the cargo with which you began.

If you achieve this feat of daring then you will, naturally, be rewarded by the gift of a knighthood from your grateful, and avaricious, Queen.

You move using the cursor keys marked with arrows.

At intervals you will be told the situation at sea and asked which action you would like to take from the choices shown.

Remember to consider your options carefully as to the amounts of cargo, food, cannon balls and crew conditions.

If the program does not understand your response, you will hear a tune and you should try again.

Damage rating is based on a 1 to 10 scale. If you are damaged to the level of 10 then I'm afraid that it's into the sea for you, as the Golden Hind settles gently below your feet.

Do your best, as the present Government is emptying the coffers more quickly than you are filling them.

This game was also supplied as a type-in with the book BRAINTEASERS, also be Genevieve Ludinski.
It was then included in the series of BRAINTEASERS in EUG #54, where further instructions on how to play it can be found.