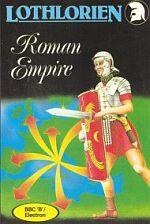 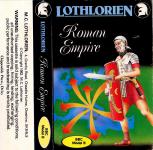 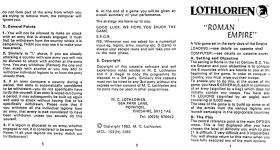 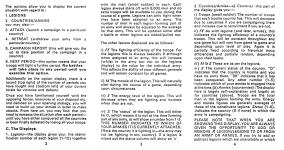 A game, I think, for the mature player, who likes to use his head rather than shoot from the hip. Read Review

A War game set in the early days in the Empire.

The setting is Rome in the first century B.C. You are Emperor and your objective is to conquer the six countries which are hostile to you at the beginning of the game. In order to conquer a country, you must wipe out their troops.

To enable you to do this, at the outset of the game you have five GENERALS, each in command of an army (signified by a flag) which does not initially contain any troops. You have also 10 LEGIONS (signified by an eagle) each consisting of 5,000 men.

The idea of the game is to build up some or all of the armies from the various legions and launch campaigns in the appropriate countries.

The central reference point is the main OPTION menu. This is first displayed after you have chosen the level of difficulty you wish to play (1 is difficult, 2 very difficult and 3 impossible). You will always return to this menu when you have fully executed any of the main options.

The options allow you to display the current situation with regard to:

Additionally on the option display, there is a record (top right) of the number of periods you have fought and (bottom left) of your current totals for victories and defeats.

Once you have familiarised yourself with the opposing forces, resources at your disposal etc. and decided on your opening strategy, you will need to build up your armies in order to make attacks. From here on, you may find that you need to reassess the situation after each period - until you have either conquered all the countries or been finally defeated by losing all your troops.

The display gives you: the identification number of each legion (1-10) together with the men (small soldier) in each. Each legion always starts off with 5,000 men and no extra troops will be available to you during the course of a game. Legions can only fight when they have been assigned to an army. The number of men in each legion forming part of an army will always be adjusted to the average for that army. This will be updated either after a battle or when legions are added/pulled out.

The other factors displayed are as follows:

a) Countries: this part of the display gives you:

b) Armies: (YOUR armies)

The display here is largely self-explanatory and largely as for countries (above). Troops are the total men in the legions forming the army. Energy and morale figures are generally averages of those of the constituent legions. Status (1-6), indicates the country (0 if none) in which the army is campaigning.

Please note that, when you are showing this display, you are always given the opportunity to add or remove a legion(s) to or from an army(ies). (If you try to add or subtract legions which are unavailable or which do not form part of the army from which you are trying to remove them, the computer will ignore you.)

GOOD LUCK. WE HOPE YOU ENJOY THE GAME.

NB. Whenever you are asked for a numerical input eg. legion, army, country, etc. 0 (zero) is always your escape route and will take you on to the next phase.