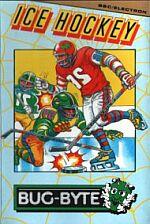 Is this the right version of Ice Hockey? Some machines received different versions with the same name.

This item contains versions of Ice Hockey for Acorn Electron and BBC B/B+/Master 128.

The music is jolly and the ricocheting puck is quite amusing but there is not enough here to hold my interest. Read Review

Whatever this is, it is not an adequate ice hockey simulation. Still, you might enjoy it. After all, someone at Bug-Byte thought enough of the game to release it. Read Review

I really wonder if Bug-Byte checked Ice Hockey on the Electron. I feel sure the company can't have intended to let such a poor game tarnish its reputation. Read Review

This is a well-produced and fun game which represents good value for money with its low price tag. Read Review

"Ever thought you would be any good with a hockey stick? Can you be the King of Ice Hockey? On the other hand, who gives a flying puck if you don't win? It's only a game - by Michael Stanger. Fast, Furious and Very Slippery! Two Player option."

Each team of six players has a goal minder, two defencemen and three forwards.

Play is commenced and after a goal has been scored, by a face-off. The puck is dropped in the centre of the rink between the sticks of the opposing centremen. At other times, the puck bounces off the sides to come back to play. The two blue lines divide the playing area into three zones, defence, neutral (centre) and attacking zones. Only three players may be in their own defence zones when the puck is outside it.

A player may only enter the attacking zone in line with or behind the puck or puck possessor. He may not take a pass from a team mate who is at the moment of passing, in another zone. To stay on-side, a player can only pass to a colleague in the same zone (also to anyone in his own half if he is in his defence zone).

When he presses SPACE or a fire button, he can hit the puck forwards.

The score-board and time will be shown at all times; when the time reaches 200, the game will be over. A new game will start after a short pause.