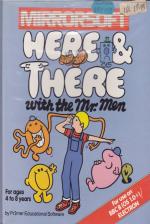 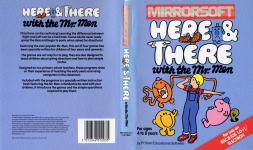 Excellent value, good fun and well-liked by those children who tried it out. Read Review

This is the type of educational software I would like to see entering the home market. Read Review

Good value for money... Four games for the price of one. Read Review

Directions can be confusing! Learning the different between Right and Left can be a hard task. Some adults never really grasp the idea and begin to panic when asked for directions!

Featuring the ever popular Mr. Men, this set of four games has been specially written for children of four years and upwards.

The games are not only fun to play, they are also designed to teach children about giving directions and how to plan simple routes.

Designed by two primary school teachers, these programs draw on their experience of teaching the early years and using computers in the classroom.

Included with the programs is a specially written instruction book featuring the Mr. Men. Intended to be read with your children, it introduces the games and the simple operations required to play them.

Directions can be confusing. Learning the difference between Right and Left can be a hard task. Some adults never really grasp the idea, and begin to panic when asked for directions!

The aim of these programs is to lead children in an amusing and stimulating way, from:

The games are also about simple route planning, and therefore involve thinking ahead.

I hope you will read these stories with your children as they play the Mr. Men computer games for the first time. They are intended to introduce young children to the computer games in an amusing and lighthearted way.

Mr Tickle is shattered! Nobody laughed at his last prank. See if you can put him together again and revive his tickling powers - ready for the next game.

The jigsaw pieces outside the box are waiting to make a picture for you. They will move only in straight lines to the centre, either up, down or across the screen.

See the yellow wall? You can line up the doorway with the yellow piece of puzzle by using the arrow keys (cursor left and cursor right for the top and bottom walls, cursor up and cursor down for the side walls).

Did you line up the doorways properly? If you didn't the puzzle can't be finished.

As soon as all the walls are red, the yellow pieces will try to zoom through the doorways to the centre of the box.

Mr Tickle has come to cheer up Mr Grumpy. But Mr Grumpy doesn't want to be cheered up. He has made his doorways so small that Mr Tickle cannot get through.

He thinks he's sage, does he? Well, you and Mr Tickle know better. Mr Tickle's hand can still fit through the doorways. He can make his arm grow longer and longer, and so he can still reach in and tickle Mr Grumpy.

In this game, Mr Tickle lets you choose where to tickle Mr Grumpy - in his ribs, on his head, under his feet, or anywhere.

Before you tickle Mr Grumpy you can move the doorways if you need to, just like you did in the last game, Mr Tickle's Jigsaw Puzzle. You can line up the doorway in the yellow wall with Mr Grumpy by using the arrow keys (left and right for the top and bottom walls, up and down for the side walls). When the doorway is ready, press RETURN. This wall will turn red and the next wall will turn yellow. If you are not going to use this doorway, you don't mind where it is, so just press RETURN. After pressing RETURN four times all the walls will be red and Mr Tickle is ready for you to tell him how to reach Mr Grumpy.

If you find it easier to use the arrow keys, you may do so.

If you make a mistake you can rub it out by using the DELETE key.

When your list is complete, press RETURN and see if you and Mr Tickle have reached Mr Grumpy.

Are you stuck and don't know what to try? Then try to tickle Mr Grumpy's head with this:

An even better place to tickle Mr Grumpy is his feet. Feet are so ticklish, aren't they?

Now try to tickle Mr Grumpy in other places, but remember, in this game, Mr Tickle's hand cannot go across anything already drawn on the screen.

If you find it too hard to plan a whole list of directions for Mr Tickle, you can do it a step at a time. You do this by pressing the 'C' key before you start your list. A boot will appear on the screen to show that you are doing it a step at a time. Now, as you give Mr Tickle each instruction, it will happen straightaway instead of waiting for the RETURN.

On the other hand, if you get too good at tickling Mr Grumpy, he will try to block up the doorways with chairs, but there always seems to be a way to tickle him!

When you are good at the game try a double tickle, or even a triple tickle, in one go. You can make Mr Tickle's arm bounce off inside walls, chairs, Mr Grumpy, or even Mr Tickle's own arm. Remember that inside the house Mr Tickle's arm will not stop at the doorways. It will only change direction when his hand bumps into something.

What a lovely afternoon for a snooze! Mr Lazy has found just the place, under a large apple tree. As he stretches out in the soft grass, he notices a juicy red apple up in the tree. As you know, Mr Lazy is far too lazy to climb the tree and pick the apple! He just lies down under the apple, waiting for it to drop.

Suddenly a friendly worm appears. He would like to help Mr Lazy, but being such a small worm, he cannot see that far. He will climb the tree and push the apple off, but you must tell him where to go.

You will need to give the worm a list of things to do. At each fork in the tree he will do the next thing on your list. He can read 'M' for "move", and 'R' for "turn right". If you find it easier to use the arrow keys, you can use up for "move", left for "turn left", and right for "turn right". If you make a mistake you can rub it out by using the DELETE key. When your list is complete, press RETURN, as in the last program, Mr Tickle and Mr Grumpy.

Remember, worms don't climb on their backs, so, from the moment the worm starts, he will be looking along the tree-trunk.

...and, being a playful little worm, he will knock the apple down on to Mr Lazy's sleepy head!

But what is this? It's a magic apple tree. Two more branches have grown, and there is another juicy red apple!

The gang of four Mr Men are trying to stop Mr Tickle from moving. He has been such a nuisance rushing around tickling people. Can you help to trap him?

Mr Tickle wants to get past the gang of four. He will usually move forward on the red squares, but if he can't he is allowed to step back.

You are in charge of the gang of four who are trying to trap Mr Tickle. They are only allowed to move forwards on the red squares.

Choose which Mr Man you want to move. Press RETURN until he appears in the top right hand window. Then press the left arrow key to tell him to move a step to the left, or the right arrow key to move a step to the right. If you were like Mr Clever, you could tell him to move to his left or his right by using the 'L' and 'R' keys. Go on, try it. Try pressing 'L' for his left, and watch him move to your right.

Did you see Mr Tickle also move a step? Choose another of your Mr Men to move forward, but be careful. If you leave a gap, Mr Tickle will give a wicked grin and hop right through!

Games Like Here And There With The Mr. Men

First Steps With The Mr. Men