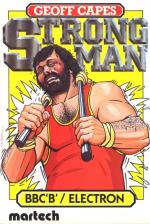 Is this the right version of Geoff Capes Strongman? Some machines received different versions with the same name.

There is 1 other item featuring this same game (that we know about!). Click any of them for their details. 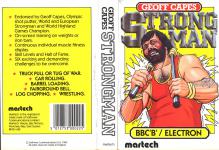 A new challenge of six rather different events which are presented in an unusual way. Read Review

I know lots of people who like this kind of game, but I would invest my money elsewhere. Read Review

Requires a good balance of speed and skill, and is excellent value for money. Read Review

What are you - man or mouse? This game will help you find out.

To become a real strongman like Geoff Capes is not easy. Muscles that can roll a car onto the roof or hurl barrels onto a waiting truck don't just grow overnight. If you are hoping to match these feats, you are going to have to work hard during the training sections. Even if you manage to build up the sort of body equipped to cope with each of the six very difficult events, you will need skill and quick reactions to be successful.

In STRONGMAN you will have to take control of Geoff's body as he tries to complete each different event. You will also have total responsibility for the general condition and fitness of Geoff's body, trying to make sure that it is able to cope with the high demands each event will make upon it, as well as having the stamina to get right through to the very end.

To help you do this, Geoff's body has been divided into several different areas represented by Muscle Icons. Each muscle area contains a gauge which will help you see how fit that area of muscle is and how much energy is available for use.

Different events will use different muscles to a greater or lesser extent. For example, the arm muscles may be especially important during the log chop.

At the beginning of each game level you will have a Training Session. During training you can build up each muscle area ready for the six events to come. As you play the game, you will discover which muscle areas are especially important and can make your training sessions more specialised, building up muscle where you know it is needed most.

If the gauge in any muscle area reaches zero, Geoff will collapse and you will have to start all over again.

The rate at which muscle energy is used up will depend not only on how quick and skillful you are, but also on how much effort you decide to use. During most events, you can adjust the effort being made by Geoff's body to anywhere between 0% and 100%.

The higher the effort, the easier it will become for you to successfully complete an event and move on, but everything has its price and that price is paid by Geoff's muscles. The greater the effort, the faster each muscle deteriorates and the faster and more difficult the game becomes.

In each event therefore, you will be hoping to find a good compromise between your skill during game play and how much muscle you can afford to use. Since any muscle not used will be carried forward to the next event, the more efficiently you complete each event, the further Geoff will be able to go.

After each event you will have a limited rest period during which you can try to get Geoff's body ready for the next event.

If you manage to complete all six events, you will have a chance to re-train and then try each of the six events again. However, the further you go the harder each event will become to complete.

Not all the strategy involved has been given to you in these instructions.

At the start of each game each muscle is zero. Before you can build up these muscles, you must train.

Training is achieved by moving the joystick left and right as many times as you can in ten seconds. As you do this, you will build up muscle which will be represented by a bar gauge on the screen. The further you can move this gauge the more muscle you will have.

To start training, simple move the joystick left or right, then work as hard as you can.

If you are not a real strongman, simply press the fire button and you will automatically recieve a default amount of muscle - but you will have no control over this and may be disappointed.

Having obtained some muscle you now have to allocate it to the different muscle areas. To do this, use the joystick to move the arrow to the chosen muscle icon. Muscle will be transferred into that area of the body for as long as the fire button is depressed. Initially it's a good idea to build up each muscle equally, but as you get used to the game, you will hopefully discover which muscles are more important and you can adjust your allocation accordingly. Remember, if any muscle area reaches zero, Geoff will collapse.

In between each event is a small rest period during which you can reallocate a small amount of muscle. The amount you recieve may be dependent on your performance during training or previous events. You should try to allocate extra muscle to those areas which you think will be important in the next event.

The effort being put into each event can be increased or decreased at any time simply by pressing the cursor up or cursor down keys respectively.