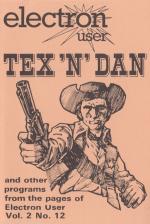 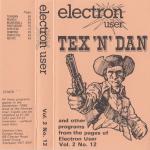 Feel like a ball game but can't be bothered to go out?

well get your opponent and let your Electron provide the court with BOUNCE BALL.

Written by Ian Kirby, it's a two player game that harks back to the earliest days of video games but is still as much fun as ever.

Take a rest from blasting nasties and being chased round mazes and take on your Electron at Reversi.

Exercise your mind and give your fingerips a rest as you ponder your strategy. You'll find your Electron a formidable adversary.

The program works on a grid system with 64 squares. Each square contains a number and the lower the number the better the square.

When it's the computer's turn it checks all 64 squares to see if it can turn over any of the player's counters and find the best legal move. If it can't go then the player has won.

When it is the player's turn it checks that the move is legal. If you can't go, then ESCAPE must be pressed and the computer wins.

The data at the end makes the computer play for the corners. Altering this will alter the computer's style of play.

Tired of arcade action but don't want to hurt your brain with logic games? Well, why not go back to the days when a man was a man and do what a man has to do way out West?

Despicable Dan has ridden into town and the scene is set for a showdown between Dan and Tex the sheriff (you).

Tex has six shots in his gun, which is reloaded when Dan has used his six shots.

Each player has three lives, and when Dan has lost all his lives the game moves on to the next level.

On each progressive level the number of shots Tex starts with is reduced.

To make things a little more difficult, Tex can only fire straight, or at a preset angle, left or right depending on his proximity to Dan. Points also are awarded for shooting pieces off the cacti, which can only be hit when firing straight up.

On the third screen, one of Dan's gang throws a rattlesnake onto Tex's side of the road. This snake proceeds to chase Tex for the rest of the game.

Tex can jump over the snake by pressing the spacebar. But if he comes into contact with the snake he loses a life.

If Tex loses all his lives, an undertaker will come out and carry him off. As you might guess, the game is then over.

As well as this one player versus the micro, there's a two-player option in which both players are evenly matched.

The game will also demonstrate itself.