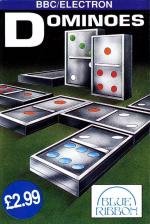 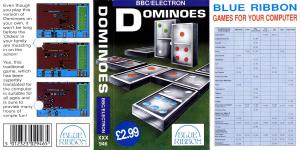 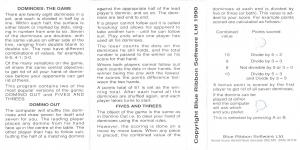 It provides that mix of luck and skill which make for a good game. Read Review

Even though you play this version of Dominoes on your own, it won't be long before the 'Oldies' in your family are muscling in on the action!

Yes, the traditional game which has been superbly translated for the computer, is suitable for all ages and is sure to provde many hours of simple fun!

There are twenty eight dominoes in a set, and each is divided in half by a line. Within each half, the surface is either blank or marked by dots, ranging in number from one to six. Seven of the dominoes are doubles, with the same values on either side of the line, ranging from double blank to double six. The rest have different combinations of values, for example, 6-5; 4-1; 3-0.

Of the many variations on the game, all share the same central objective; to get rid of all your hand of dominoes before your opponents can get rid of theirs.

This program contains two of the most popular versions of the game; "Domino Out" and "Five And Threes".

The computer will shuffle the dominoes and draw seven for itself and seven for you. The leading player places any domino from his hand face up in the centre of the table. The other player then has to follow suit, putting the half of a matching domino against the appropriate half of the lead player's domino, and so on. The dominoes are laid end to end.

If a player cannot follow suit it is called 'knocking' and it allows his opponent to take another turn - until he can follow suit. Play ends when one player has used all his dominoes.

The loser counts the dots on the dominoes he still holds, and the total number is passed to the winner as his score for that hand.

Where both players cannot follow suit, each counts the dots in their hands, the winner being the one with the fewest. He scores the points' difference between the two hands.

A points total of 61 is set as the winning total. After each hand, all the dominoes are shuffled again and each player takes turns to start.

The object of the game is the same as in Domino Out. i.e. to clear your hand of dominoes using the normal rules.

However, the scoring is done on a move by move basis. When any piece is placed, the combined value of the dominoes at each end is divided by five or three (or both). This value is added to your score. For example, points scored are calculated as follows:-

A bonus point is scored by the first player to get rid of all seven dominoes.

If the domino can be played at either end, the computer will ask which end you prefer. This is selected by A or B.