Release: Professionally released On Cassette (Side 1 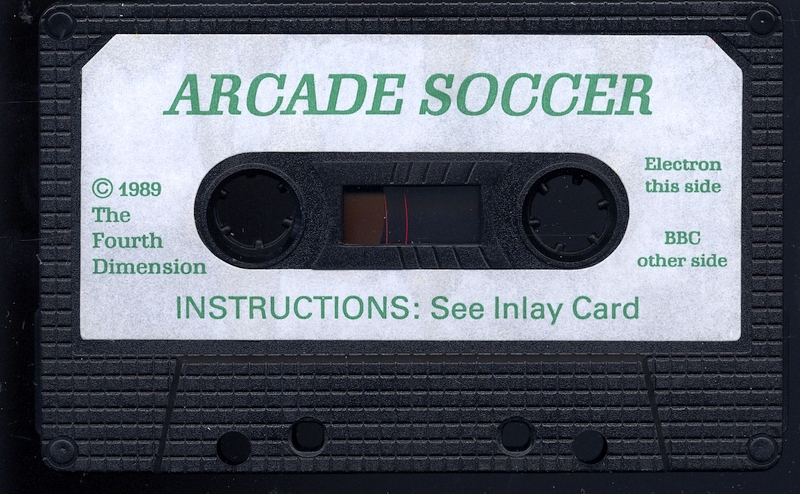 An overhead football game in which you must power up/down the field, passing the ball and scoring goals.

There are no users who want to buy a copy of this item.
(Browse Most Wanted)

dave_e, an authority on collecting games for the BBC/Electron, says:

As one of the later Electron games, and sold exclusively via mail order, Arcade Soccer is actually quite a rare cassette. As one of only two Electron football games, and with some collectors desperate to collect football games per se, it's not seen all that regularly nowadays.

Where To Get It

Arcade Soccer really is football action at its very best. Using an overhead view to make gameplay as exciting as possible, it features everything that you could want in a football game. Corners, sliding tackles, throw-ins, goal kicks, dribbling, shooting, passing and much more. But not only does Arcade Soccer give you Total Action it also puts you in Total Control.

Firstly you can play with either keyboard or joysticks, against the computer and/or with up to 23 friends. The options are almost limitless; you can choose the skill of the goalkeepers, the speed and length of the game, play 'friendlies' or tournaments and even enter the most coveted of championships - the World Cup.

Arcade Soccer lets you control the action - 'It's brilliant.'

Arcade Soccer comprises of two basic sections, one controlling all the options and results, and the other where you actually play a game.

When you start a new game you will be presented with Round 1 of the World Cup (top) and the Status Icons (bottom).

Round 1 has sixteen teams. To qualify for the next round you must beat the team you are pitted against. Round 2 has eight teams. Round 3 is the semi-finals and Round 4 the final.

There are seven different parameters that you can change to affect the way Arcade Soccer plays. (These are at the bottom of the screen). The key that changes the status is given before each explanation.

Joysticks can also be used

Spotted a typo or inaccuracy in the instructions for this item? and we'll fix it up at once!