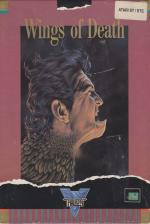 Maybe monsters just don't like hot weather. Last winter there were hordes of the beggars crawling all over every ST games screen in sight, yet over the last few months we've seen hardly a single decent shoot-'em-up. But at least there's hope for your seized-up trigger finger: Wings Of Death is going to save you from months of physiotherapy and boredom.

The game is a vertically-scrolling shoot-'em-up in a traditional style. The objective: charge blindly through a series of levels, blasting everything that moves, dodging indestructible missiles and encountering the end-of-level guardian, etcetera, blah blah.

You know the kind of thing. On every level you face a myriad of bad guys determined to wipe you off the face of the earth. Blast them and some leave behind small pods which you can collect to pick up extra weaponry, auto-fire options, new lives, multi-directional firepower and an improved ship. But beware the skull pods which reduce you to a pathetic weakling armed with just a single shot.

Nothing new here, but then shoot-'em-up addicts, like any genre devotees, don't want challenging gameplay and new scenarios: they want reassurance.

And when a familiar gamestyle is done with style and finesse, as here, the results can still be rewarding. Visuals are bright, lively and exciting. Alien sprites are massive - especially the end-of-level and mid-level guardians - though it has to be said they aren't animated particularly well. Through the game you face a legion of bright and colourful bad guys who turn up just when you think the action is getting simple.

Sampled sound effects inform you whenever you pick up bonuses - though only about as clearly as a BR train announcer with a mouthful of Yorkie. Rather more dynamic samples, this time as music, form an introduction to the action, while impressive sound chip tunes accompany play.

Movement of the ship is remarkably responsive and the graphics are excellent - bright, colourful, detailed and full of variety.

Certainly the most important question to be asked about any shoot-'em-up is "How fast does it play?" In this area, Wings Of Death scores above many of its predecessors such as Gemini Wing, Xenon and Dragon Spirit.

And the action really is extremely smooth. It's not uncommon for vertically-scrolling shoot-'em-ups to have this advantage, but they don't often have exciting visuals and massive sprites on the scale of Wings Of Death.

It might as well be admitted. There's absolutely nothing original about this joystick challenge, but if you're missing some mindless, manic action you'd be hard pressed to find anything to beat it.

If you're still enjoying ripping the heads off aliens in Xenon II, Wings Of Death isn't going to offer you anything more, but then it doesn't claim to be an original.

We first loaded Wings Of Death days ago, and ever since a 14 year old schoolkid has been revolting (as it were) and steadfastly refusing to give up his sticky grasp on the joystick - not a boast too many shoot-'em-ups could lay claim to.

There's absolutely nothing original about this joystick challenge, but if you're missing some mindless, manic action you'd be hard pressed to find anything to beat it.