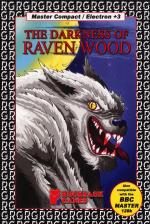 A new illustrated text adventure for the Electron in a world of wolves and wacky weather. Dave E dives in...

When I was young, I didn't like text adventures. I would much rather play a shoot-'em-up or a graphic adventure on my Electron. I wasn't alone. I can't honestly remember meeting a single kid who played them, and I was always amazed that new text adventures were released every few months. Who was actually playing them, I wondered? Where was the market? Who was the market?

When I started collecting Acorn Electron games, later in my life, I gave text adventures more time. However, I wasn't impressed by the 'classics'. Scott Adams left me either cold or, in the case of Savage Island Part One, seething with rage. The Mysterious Adventures series I rechristened the Mediocre Adventures. It wasn't until I got my hands on the Rick Hanson series (which was no mean feat back in the Noughties, I had to scour a lot of classified ads!), with its James Bond style hero, that I saw the first 'evolution' of the text adventure. And then, finally, it was the Larsoft adventures - a selection of five atmospheric stories from the hand of Geoff Larsen (uber-rarities now) - that convinced me that some text adventures were indeed better than some arcade games.

Fast-forward two decades and we've got what is, I believe, the very first disk-based, illustrated, two-part text adventure for the Acorn Electron: The Darkness Of Raven Wood. And it's a beauty, what might well have been an evolution of Larsoft's adventures, had Geoff written a sixth masterpiece and looked towards utilising the larger storage facilities of disk. Instead it has fallen to a relative newcomer, John Blythe, to conjure up a world of foreboding landscapes, zombies and things that howl at the moon. Now, in point of fact, he actually did this four years ago, as The Darkness Of Raven Wood was released in 2017. However, it was originally a bit of a buggy adventure, and prone to crashing on certain BBC and Electron set-ups, and it was slow and memory-hungry too. So, for a while, it sort of occupied that middle ground where it had been uploaded to a forum post on Stairway To Hell, but wasn't quite good 'enough' to be considered finished.

A few text and graphic compression routines, and a lot of testing, later, however and it's now been published on both 5.25" and 3.5" disc (and on both DFS and ADFS) by Retro Software. And very nice it is too, presented in a flat, oversize slip case, complete with glossy poster, instructions leaflet and solution card. Slightly cheaper than 2017's arcade shooter White Light, it's currently available for £12.99. However, is this likely to convert you to text adventures, or is it beautified boredom?

Well, if you invest in a physical version, there's certainly an air of spookiness pervading the whole thing. The front cover shows a rather aggressive wolf, and the plot informs you that the year is 1862 and you have just arrived at Raven Wood Manor, the village of your long-term friend Raynard. You and Raynard were school-friends, you see, and you kept in touch via letter after you began your careers. You went away to the city, he stayed behind and eked out an existence as Raven Wood's blacksmith. However, his letters to you took on an ever more frightening tone in recent weeks. He wrote of a mysterious new Lord of the Manor, the disappearance of some of the villagers' children, the abduction (and quite possibly murder) of the village priest and what seemed to be a permanent snowstorm that had beset the village and its surrounding environs. In his most recent letter, he asked if you would visit and see these manifestations for yourself, and so you, ever the naive and foolish yuppie, did exactly that.

The game takes over as you arrive, and the atmosphere remains suitably spooky as you start to explore. You find Raynard gone, and the few inhabitants of the village hiding inside the local pub...

The good news is that this is not one of those basic, circa-1978 text adventures where your biggest challenge is in fighting with the parser itself. Everything is very intuitive, with compass directions abbreviated to one letter (NSEW) and the ability to go IN and OUT of the village's buildings. The illustrations are presented in the top half of the screen with the text redefined from the usual, rather ugly, 8 x 8 characters to much more pleasing 4 x 3 ones. Moving around does access the disc, but the compression routines make this light work, with barely a half-second pause between locations. Playing via emulation you probably won't even notice it (especially if you opt to play without disk drive noises turned on).

The illustrations have been put together with a lot of care. Mode 5 limits the Electron to four colours, but different locations have used differing combinations of the seven colours available, meaning that you barely notice this limitation. The village scenes are particularly impressive, and reminded me a lot of the strip outside the Scumm Bar in the first Monkey Island game. Exploring the first few locations I discovered the key to Raynard's blacksmith's shop, and let myself in, only to be confronted with an obvious puzzle that involved lighting a fire with a pair of bellows. (Bellows, hmmmm, thank goodness for Google, eh?) I also discovered the villagers were happy to talk to me after I drained a pint of beer and a stranger near the fountain was a good guide as to what to do next.

The puzzles are pretty tough, however. It wasn't long before I was wandering somewhat aimlessly, not really knowing how to find Raynard, where all the wolves fitted into the mystery, or what I was supposed to do next. I had to resort to the solution and the things I discovered I would likely never have worked out alone. To give one obvious example, there are signs littering the woods around the village and if I see a sign, I always READ it. However, I wouldn't ever think to also EXAMINE it (which you must). For whatever reason, my brain just doesn't work that way.

Some of the inclusions are also quite strange. After you've discovered a magic word, you can say it to teleport to a particular location. This inclusion seems pretty strange for an adventure which is otherwise grounded in Gothic horror. There's also the not-especially-trifling matter of sometimes being randomly killed by a pervading wolf in the second part of the game. Being offed in this way actually sends you all the way back to the beginning, which is very annoying if you haven't saved your position, especially when you might at least expect only to have to restart from the beginning of part two. In fact, I really can barely believe that none of the Stairway To Hell's game-testers didn't seize upon this and correct it. I've never played an adventure in more than one part before where you couldn't restart from the beginning of a subsequent part!

I suppose the biggest draw to The Darkness Of Raven Wood is its illustrations. Its closest stablemates in respect of illustrations are Twin Kingdom Valley (Yes, the obvious choice), The Lost Crystal and (on the BBC) The Hunt: Search For Shauna... and I don't think anyone could argue that The Darkness Of Raven Wood doesn't have better illustrations than any of these. Graphically, you won't do better. That's just a fact. However, lovely illustrations do not a good text adventure make, which is why it's also very satisfying to be able to report that, if there were no graphics, this would be just as impressive as one of the (very superior) Larsoft adventures.

But that's not to say that there aren't a few little problems... The first is that the aspect ratio of the illustrations is off. They seem stretched, horizontally, entirely as if they were originally designed for a Mode 1 screen and then rendered in Mode 5. Perhaps that's nit-picking, and perhaps it's not noticeable to most players but only to people like myself who have designed too many graphics or sprites on the Acorn machines. There are also a few grammatical errors too (e.g. it's instead of its).

I think this adventure will appeal most to those who are lukewarm to text-only adventures. The lovely graphics, and the substantive plot, make for an immersive playing environment and elevate this to one of the best illustrated adventures I've ever seen on the BBC and Electron machines and, at £12.99, I think it's a very reasonable buy. If you're one of those people who hasn't really considered playing text adventures before, this is a pretty comfortable introduction to the genre too. In fact, despite a few of my quibbles, as long as you remember to save your position as soon as you start part two, you won't go far wrong here.