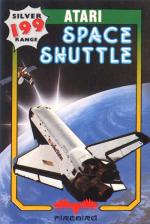 If the title sounds familiar it's because this is a budget re-release of a 1983/4 game from Activision. Firebird has snapped up all Activision's old titles, so we can look forward to seeing some old favourites again.

You are in control of the shuttle Discovery on its 101st mission and your target is an orbiting satellite 210 nautical miles above the Earth.

Your mission is to launch, rendezvous with the satellite and return safely to Earth as many times as you can using minimum fuel. There is one snag - every time you dock with the satellite its orbital path becomes more and more erractic. Your success in coping with this aberration is evaluated at the end of your mission.

There are three levels to pursue: The first is Auto-simulator, where the shuttle flies practically by itself, and all you have to do is dock with the satellite.

The second is Simulator, which is a simulation of the flight controlled by you and the computer. Here you have to use most of the available keyboard commands and life turns out not to be quite the bed of roses you thought.

Finally STS 101 is a fully fledged shuttle flight where every key command is available to you, and you have the ability to abort all functions when and where you like.

This level is for fast thinkers with twelve pairs of hands, qualified NASA astronauts, Atari User reviewers of lunatics.

Your flight begins with the launch. You have to activate the engines and ignite them at the right time or the mission will be aborted.

After a successful lift off, you must keep the engines at the right power - the computer displays the exact amount of thrust to use - and follow the digital course readout.

Once in space you have to stablise orbit by opening the cargo bat doors and adjust your position so you have visual contact with Earth. This is achieved by setting your nose down.

Once a stable orbit is achieved you have to match your speed, relative position - X, Y and Z axes - and successfully rendezvous with the satellite.

All this involves major keyboard use, major joystick use and constant reading of the instructions so that you know what you are doing.

Once all this insanity is complete, you must turn the shuttle around, fire the engines and decelerate to leave orbit. Don't forget to close the cargo bay doors and set the correct pitch and course for re-entry.

At last, the landing! The pitch must still be at the correct setting and tight turns must be made to keep the shuttle on course.

Once sonic booms have been made by your shuttle and the chase planes, the shuttle becomes a glider. Before you reach the runway you must deploy the landing gear. Once the wheels touch, keep the nose down and slow to a stop. That wasn't too difficult, was it?

When landing is complete, the computer displays a numeric value showing what mistakes you made or, if you didn't make any - which seems extremely unlikely - the number of dockings you successfully accomplished. For a title that was released four years ago, I'd say this has done very well indeed.

On the negative side, there are too many commands to handle at once. I know it's supposed to be a shuttle, but this is going a bit too far.

Also, the evaluation messages at the end of your mission could have been written on screen rather than you having to resort to the instructions for enlightenment.

Talking of the instructions, the acronyms are a nuisance, as you have to keep looking up what TAEM means while burning up in re-entry!

Apart from some bad points, Space Shuttle performs well. The graphics aren't mind-shattering, and the sound limited to rumbles and bangs, but it is enjoyable and at a very good price.

The graphics aren't mind-shattering, and the sound limited to rumbles and bangs, but it is enjoyable and at a very good price.