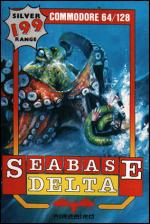 For a pocket-money priced game, you could do a lot worse than Seabase Delta. This is the sequel to Subsunk, featuring your friendly reporter Ed Lines on yet another underwater mission. You, as Ed, have achieved the objective of Subsunk, and sent a distress signal from the stranded submarine, only to have it dragged by a strange magnetic force into Seabase Delta.

You find yourself in the company of a corpse, and documents near the body reveal a plot to despatch a nuclear missile at a British base. Your job is to stop it (and get a hot story back to your Editor, I should think).

Travel is by an underground rail network linking parts of the base, and through observation windows you can see the missile, but cannot yet get to it - most frustrating. Eventually, you reach a hatch leading to an airlock. Will you drown yourself in the process of operating it?

There is a whole-screen picture for each location, quickly drawn, and displayed only once unless you type LOOK. There are far better than the rather comic graphics of the game's forerunner.

The text is friendly, vocab reasonable, and the response fast, except for some built-in delays. These occur when you EXAMINE or OPEN something, and a new object is about to be revealed. There's also a delay during tube journeys, which is frustrating, as there are quite a few trips to make, each with the same sequence of commands, for each trip. This slows down play considerably.

Still, at £1.99 you can't go wrong - a cheap and cheerful adventure that should please anyone after a light-hearted budget game.

A cheap and cheerful adventure that should please anyone after a light-hearted budget game.