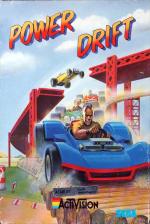 We're always hearing about classic Sega coin-ops, but how many really good conversions have we seen? Power Drift is the latest to come under the programmer's scrutiny, and it's no small challenge. What distinguishes it from other car games is the buggy you drive and a ferociously tricky course. Playing in a buggy might have its limitations but you wouldn't catch a Testarossa leaping off log courses.

Power Drift is the kind of race against other vehicles which we've seen many times before. What makes it more of a challenge are the serious obstacles which confront you. These include long hill slopes and scores of roadside sprites. The game is complicated even more by the twelve competitors that you're battling against. With these road hogs swerving in front of you, fighting your way to a leading position can be a nightmare.

Power Drift begins by asking you to select one of five race courses - there's little difference between any of them other than a change of roadside sprites and the twists and turns in different places. You also choose one of twelve drivers to command the vehicle for you - there's definitely no difference here, since they all look like they've crawled straight out of an acid bath.

You start at fourth position and the challenge is then to keep up with the rest. To qualify for the next round, you only need to get in to one of the top three positions, and for the first few circuits this is relatively easy. However, with each round the challenge becomes more and more intense. Bends begin to get sharper, your opponents begin to most faster, and hills become almost unbearably steep. Fortunately, it's not a case of crash three times and die; you can crash the buggy as many times as you like but since this takes up valuable time and knocks your speed down, it isn't an advisable way of completing the circuit.

There are four laps to each circuit. You know when you've completed a lap because you pass under the start flag and a brief bout of sampled speech lets you know the number of remaining laps.

Various controls are depicted under the main playing screen. Here, you're informed of your speed, the gear you're using (either high or low) and the lap you're negotiating. To assess your position in the race, there's a counter at the bottom right of the screen. Only when you reach one of the top three positions can you breathe a sigh of relief and hope you don't go careering off the next bend.

As other competitors shoot into the top three positions, their vehicle is displayed, working from the top of the screen downwards. These can make it harder to play as you can no longer see the entire course, but they do remind you that you need to put your foot down if you're going to qualify.

If you don't qualify for the next lap then you have five credits to your name which can be used to buy you another chance.

There's no denying the remarkable similarity between the ST and arcade versions of Power Drift. Just as you'd expect, views of the hills and corners looming up are exciting and brilliantly drawn. Some of the roadside sprites, particularly sign boards, are brilliant. What you never expect to see in arcade conversions is attention to fine detail. This is extended to a lap time sprite which appears in the middle of the screen between levels.

Other vehicles make up a major part of the game and these often swerve across your path, acting just like real opponents in a race. Seeing them hurtle at top speed and hog most of the road, you can really find yourself racing on the edge of your seat.

When it comes to the speed of the animation, things aren't quite as impressive. At lower speeds, and especially when there's little else on screen at the same time, the road moves smoothly and clearly.

But start speeding up and you begin to notice a definite and unwelcome jerkiness. Choose to play without the noise of your rumbling engine over the top of everything else and this becomes even more apparent.

Power Drift looks remarkably similar to the coin-op game, and that's its strength. It doesn't play as well, largely because its sprites insist on bouncing towards you at higher speeds, but if you were a fan of the arcade game then it will still please you. What makes this more appealing than other driving games is the originality of the course and vehicle. There's been so many standard racing games that finding one where you drive a buggy across a whacky course is positively refreshing. It's impossible to convey the thrill of seeing one of Power Drift's enormous log hills looming up, or the excitement of facing a gruelling bout of turns through a forest of roadsigns, but there are exactly what make Power Drift fun to play.

The originality of the course and vehicle makes this very appealing. There's been so many standard racing games that finding one where you just drive a buggy across a whacky course is positively refreshing.