﻿ Masters Of The Universe: The Adventure Game (US Gold) Review | Commodore User - Everygamegoing 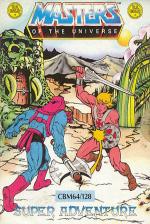 Masters Of The Universe: The Adventure Game

Playing the part of Prince Adam of Eternia, you are asked by King Randor to seek out He-Man, for only he can save Eternia from a series of terrible earthquakes. Of course, it is not so much a question of seeking He-Man, as becoming He-Man - but first you will have to find the Sword Of Power.

As He-Man, knowing how to get into Castle Grayskull (if you don't, watch for the hint on the inlay!) will bring you face-to-face with your benefactor the Sorceress, who will give you a quest. Skeletor (who else?) is the one behind the plot to ruin Eternia through earthquakes. Restore the timelinks, and she will give you a weapon capable of defeating him.

Around the castle are some potentially useful weapons, together with a number of mathematical and horological devices, including a Timegate. Because of the dangers of a time-continuum accident caused by the quakes, this has temporarily been out of service.

So how do you set about your task? A few moments reflection will show you the way, and soon you will be facing the boulder-crunching Rockbinder, a nest of scorpionsm and Mantanna. Choose which form of death you prefer! Lucky there's a QSAVE and QLOAD feature - make sure you use it, then come back and try again.

The fun comes in deciding which weapon or object to use. A Moleculator seems just the thing to deal with Rockbinder, but how do you activate it? You'll also be puzzling your head over the advantages of owning a Minus Manacle, and a strangely reproducing head, not to mention a Wycord. You guessed it - the hand of Stefan Ufnowski has been at work again here!

Although there is one picture for each location, unlike Kayleth, none of them are animated. "There simply isn't any space left to do it!" explained Mike Woodroffe of AdventureSoft. With over eighty locations, this is not surprising.

This is no gimmick advennture riding on the popularity of Masters Of The Universe. It is a full-blown mind-bender, written by Mike Woodroffe, Stefan Ufnowski, Teoman Irmak and Graham Lilley. As an enhancement to the C64 version, C128 owners will get the game game, but with augmented text.

AdventureSoft has done it again! Mike Woodroffe has assembled a team that seems now to consistently come up with intriguing plots, devious puzzles, and quick, attractive graphics.

Masters Of The Universe: The Adventure Game

AdventureSoft has done it again! Mike Woodroffe has assembled a team that seems now to consistently come up with intriguing plots, devious puzzles, and quick, attractive graphics.