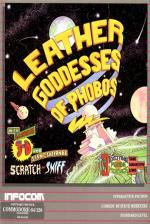 It's 1936, you're in Joe's Bar, Upper Sandusky, and you've got too much beer inside you. When you gotta go, you gotta go, so it's a choice between the small room, or soiling your clothes right in the middle of the bar. Think of the embarrassment!

Suddenly, with a flash of green light, tentacled aliens appear, and abduct you to Phobos. You awake in a cell, wearing nothing but a tightly fitting brass loincloth that covers only the bare essentials. That's if you're male; if you are a female, then you'll find yourself in a brass bikini. How does the program know? Well, you went to the toilet, didn't you?

In the cell across the way is a fellow human of the same sex, who, like you, is imprisoned by the Leather Goddesses. A visit to the observation room gives you a glimpse of another human undergoing hideous anatomical experiments - the same fate awaiting you.

Teaming up, you decide to pool your resources in an attempt to defeat the Goddesses, who are planning to take over the earth, and turn it into a pleasure park. Trent (or Tiffany, as the case may be) comes up with a detailed design for a Sper Duper Anti-Leather Goddesses Machine, and now your adventure really begins.

The parts you need are rather strange - co-writing Hitch Hikers Guide obviously had a profound effect on author Steve Meretsky. How an electric blender, a headlight from a 1933 Ford, a Cleveland telephone directory, an eighty-two degree angle and a pair of cotton balls will combine with a few other oddities to make a deadly macine, is not immediately apparent.

First, however, you must escape your well-guaded prison, and the game uses teleport devices in the shape of black circles, to zap you from place to place. Discovering the circles is part of the fun; and the rest is just fun, in and out of your loincloth!

Ever thought you'd fancy a gorilla? On Venus, there's a mad scientist, who will forcibly transfer you to the body of one of a caged pair, and watch the results! Will you or won't you? But then - you do need the length of black hose in the cage, for the machine! Only trouble is, how do you get it out?

Mars is a fascinating place, where you will meet up with King Mitre. 'Midas' was a misnomer - Mitre it is who turns everything he touches into a 45 degree angle. Uh, wrong size!

Ever fancied a frog? Course you have - if you meet one in an adventure you know full well you must kiss it. Unfortunately, the Martian one, despite its golden crown, is a deal more repulsive than your average garden frog, and becomes a 'Hulk and the ants plus' problem. Never has a problem been more pleasing to solve, though, for you will be amply rewarded by the resulting princess, when you do. And you'll get twenty points into the bargain.

Mars is known for nothing if not its canals, and the Royal Barge is moored at the Royal Dock, waiting for you to take it on a trip. Here follows a series of diabolical puns, in the form of Dock names. There's Hickory Dickory Dock, Donald Dock and Wattz Up Dock among others, but even then, there's nothing quite like My Kinda Dock, which leads to the Sultan's Palace.

Here, in the Audience chamber, you will be asked - The Riddle. If you fail to answer, answer incorrectly, try to leave, or even sneeze, you will be put to death. In fact, at this very moment, the tigers' dinner is being withheld, just in case. Poor old Trent really goofs: "The answer's a grapefruit!" he says, and that's the last you see of him. The last you hear of him is a hideous scream.

It's surprising what the promise of an hour of freedom inside a harem can do to one's riddle-solving ability, and before long, I was chooesing betweenthe Sultan's 8379 wives.

Stepping into another circle, I found myself in a house in Cleveland. No phone books around, so I set about trying to leave the premises in search of a kiosk. And here is a 'can you get out of the window?' problem all of its own! I have never before played an adventure where so many possible but incorrect solutions are provided to lead you on, and then drop you! Thinking he is being clever, the player, far from being one step ahead, is falling into the author's traps all down the line!

In my frenzy to get out of the window in search of a phone book, I hadn't even noticed the 1933 Ford parked outside - with a loose headlight!

Leather Goddesses Of Phobos is a Standard Level Adventure, which can be played on any of three levels: Tame, Suggestive, or Lewd. The game powers up in Suggestive mode, and if the player opts for Tame, the computer gives a yawn...

It also has a feature completely new to computer games - the extra dimension of smell! A scratch 'n sniff pad is provided in the package, and certain locations and events are described as having an odour. Type SMELL after such a message, and you will be told which pad to scratch. RETURN then gives a comment on the smell. Unfortunately, my pre-production copy was without the full packaging, and I only got a Xeroxed copy of the pads.

No doubt, when word gets round, there will be the usual outcry from holier-than-thou Festival of Light types, who feel they have the right to tell people what they should eat, speak and think, and who want the game banned. If so, let's hope they don't succeed, for this is a cracking good adult adventure, not just an excuse for a few sex-oriented scenarios.

Getting on a bit myself, I am fully qualified to say that it is not really suitable for the under-18s. In fact, to preserve their innocence, Infocom have provided built in protection to ensure they are unable to play the game in Lewd mode. In any case the game carries the usual over-the-top Infocom price tag so I can't see many young adventurers being able to afford it.

This is a cracking good adult adventure, not just an excuse for a few sex-oriented scenarios.