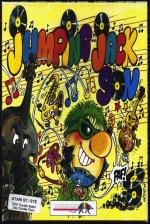 Aiming to follow the formulaic conventions of cutesy games, Jumping Jackson adds a spark of originality with its musical theme.

Each level is arranged as a series of platforms, and within each of these is a set of coloured tiles. Jumping Jackson's claim to fame is that he can change colour through purple, red, yellow and green. As he moves over the coloured squares they change to whichever colour is currently active - shown by the colour of his hair. Your job is to make all the coloured squares on each platform the same colour: achieve this and a record appears on the platform. Pick this up, find a record-player which is the same colour and place it on the deck. Only by setting all the record players going do you complete the level.

Your task is complicated by musical instruments dashing around the level. Bump into them and you lose one of your four lives. To dodge them you usually end up having to run back over all the squares you've just changed, thus turning them to a different colour. All of this is played to a nifty rock and roll track, which desperately tries to make the game seem less twee, but never quite pulls it off.

The first time you see Jumping Jackson, you're struck by its similarity to Loriciel's Skweek, but play it for a while and you quickly realise that it requires much more skillful timing.

One of the most annoying and challenging aspects of the game is the way that, in an attempt to escape being killed by the instruments you often end up wrecking all your progress by changing the tiles back again. This makes it fun, but without the multitude of icons to collect, it's lost a lot of long-term excitement and variety.

It's similar to Loriciel's Skweek, but play it for a while and you quickly realise that it requires much more skillful timing.