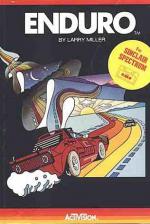 This is a hypnotic game, replicating many of the qualities of fast motorway driving. Playing it for more than 20 minutes confuses your eye, frays your nerves, and makes you sweat.

The object of Enduro is to pass as many cars as you can during a day, a night and a morning of an endurance race. The player has a "bird's eye" view of the car, and mountain ranges and competing cars looming ahead.

Conditions change as you charge along. One second they're perfect, the road meandering lazily in front of you and cars being overtaken at a satisfying rate, the next you're confronted with sheet ice and a commensurate loss of driver control. Then night draws in - tail-lights are the only indication of your looming victims.

Eventually, time runs out and the game's over, unless you pass the requisite number of cars, at which point you move up to a harder level where there are more cars to pass in the available time.

Trying to occupy the same piece of track as another car causes an immediate loss in your performance rating. The penalty for hitting the side of the track or brushing another car is having half a dozen competitors pass you. The best tactics seem to be to go flat out and take the collisions in your stride.

Enduro is a compelling game in small doses... The best tactics seem to be to go flat out and take the collisions in your stride.