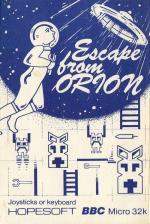 Escape From Orion is another of those games involving a lot of running up and down ladders and across platforms collecting things and awaiting the attentions of an assortment of gremlins bent on doing you in.

You are landed in the top left-hand corner of the screen by a flying saucer. Then you have to scale the scaffolding, pick up an assortment of goodies and get back to your waiting vehicle and away unscathed (could have been called Supermarket Shopping). You also have the ability to make running jumps to clear holes or low-flying missiles.

Variety is provided by four different sets of scaffolding. You can choose which you'd prefer to climb. Variations within these include conveyor belts, a gremlin launching deadly missiles, vertically moving platforms, electric doors which come down and trap you, and a gobbler which can dispense the ultimate penalty if given the opportunity.

Those of you familiar with Donkey Kong and its arcade variants should find yourselves at home with this one. Control of the player is similar but there is also enough that is sufficiently different to ring the changes.

The availability of four screen formats is a big plus and should increase the enjoyment of playing it, if only because you are less likely to get bored or stumped - you just move on to another variation. Multiply this by the selectable difficulty levels and it should keep the most easily jaded gamesperson amused for a while.

The graphics are pretty good too. The hero of the piece is recognisably humanoid - you almost feel his desperation as he struggles against the conveyor belt. He did seem to have problems with one of the platforms however, which insisted on impaling him even though a neutral observer declared he had landed fair and square.

The best feature is the 'jump'. A bang on the space bar and our hero does a slow-motion leap.

Escape From Orion seems a good investment for keen action games players. There are facilities for both keyboard and joystick operation and the graphics are good enough to keep you identified with the starring screen object - especially if you're very short and walk with a limp in both legs.