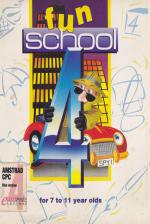 Look out kids, Europress is back with a new dimension in learning as Fun School 4 hits the streets.

The Fun School tradition of computer-aided education has been with us for years and, since its very first outing, has proved to be a total success with parents and children alike.

Each release is awaited with baited breath and each new development has met with the critical acclaim it so rightly deserves.

In this age of everchanging teaching patterns, it is becoming increasingly difficult to keep up with educational trends but, true to form, Europress' latest set of releases making up the Fun School 4 series, have all been developed in conjunction with educationalists, to adhere to current National Curriculum guidelines.

As a result, each package, whether it be for rising 5's or top Juniors, forms a truly invaluable piece of software, for use both in the classroom and at home.

Take all that on board, and add an extremely large dollop of fun on top, and I think you'll agree that the new Fun School series looks set to become every bit as successful as its prdecessors.

Targeting three different age groups, each package in the series has an instantly recognisable character, which should become firm favourites with the children.

In the Under 5s package, Teddy the Bear sits through all of the programs with the child, while Freddy the Frog helps out with the puzzles and lessons for the five to seven years olds.

For the seven to 11 year age group, the excellent character of Sammy the Spy pops up time and time again to add the fun to the serious learning curve.

Starting off at the beginning, the under fives package introduces six separate, colourful and easy-to-use programs to stimulate the children while they learn.

Teddy Paint encourages the child to create pictures using circles, triangles, squares and many other objects, to make playground, picnic and seaside scenes.

Some of the results of the program are truly amazing and will certainly give the child a lot of joy, when the results are viewed.

House and Garden helps to develop an understanding of the names of colours and parts of the house. With rising difficulty levels, this program really coaches the child through the learning process.

In Addition, the child must count all manner of objects, with correct answers rewarded by the teddies going out to play. Simple addition is also catered for in high difficulty levels, to stretch even the brightest child.

Teddy's Books also helps out in word recognition, as the child is asked to point out which book Daddy Ted is reading. Picking out which book is missing from the shelf will give the child a rewarding sequence, whilst encouragement is given to try again if the question was answered incorrectly.

Getting aboard the Fun Train is an excellent introduction to simple reading vocabulary, where the child must match pictures and, later on, words with pictures, to develop recognition.

Last on this superb first package, is Teddy D's Karaoke, allowing the child to sing along with eight popular nursery rhymes. On the higher difficulty levels, the child can tap out the tunes on the keyboard, thus enhancing keyboard skills during the fun.

A superb outing all round, Fun School 4 for the Under Fives is designed to encourage and develop the child's skills at all times making it an essential aid to the learning process at this all-important age.

Moving on to the second package in the series, Fun School 4 for the five to seven year old age group provides some excellent insights into mathematical, typing and recognition problems.

Shopkeeper, the first program in the offering, introduces the child to values of coinage, playing the part of the shopkeeper and having fun selling goods to customers, all the while adding and subtracting figures.

In the Library, the mixed up books must be rearranged into alphabetical order, starting with initial letters and working through to full titles and authors of the child's favourite books. As Freddy pops up again and again, the child will certainly enjoy this trip to the library.

Outpacing the crocodile is the aim of the game in Typing, which introduces the child to typing single letters to start with, before advancing on to groups of letters, words and, ultimately, fully punctuated sentences. As the hungry crocodile advances, typing has never been more fun.

In the Log Cabin, children must solve entertaining maths sums to help Freddy build his cabin. Starting with addition, this program also covers subtraction, multiplication up to the 12X tables and division.

The last program in this suite. Basketball, lets the child work out number and letter series in the gym! Early levels test simple alphabetical series, while later stages tackle number multiples to really get the child's mind working. As an aid to educational concepts, this package cannot come more highly recommended. Stretching the child's mind as it does, this suite of programs makes an excellent choice to expand on earlier outings in the fields of maths, writing and recognition.

The presence of Sammy the Spy in the 7 to 11 year old package ensures a collection of learning programs which children will come to love and want to tackle time and time again.

The package consists of six challenging and fascinating educational games, each developed to help children progress within key stage two of the National Curriculum. Featuring hilarious animation and attention-grabbing sound effects, the help screens and clues, included in each game, ensure that children can always deal with the questions and tasks involved.

The first game, Desert Dates, helps the child to learn important historical dates by cracking open the stones of the pyramid. As the child progresses, he/she will be able to pinpoint each event in history to its century (levels 1 & 2), decade (level 3) and, finally, to its precise year (level 4). A superb offering which has instant appeal. Spy Quiz tests the child's spelling, maths skills, science, geography and general knowledge via an amusing, multiple choice, trivia quiz, guaranteed to stimulate and educate.

In Proportions, fractions, decimals and percentages are dealt with, through entertaining questions such as "what proportion of spies is wearing hatsr, with the difficulty levels increasing through the levels to really test the child's mind.

Exchange Rates, an extremely topical subject, allows the child to get to grips with European monetary units, presenting conversion problems to deal with, as well as comparative values later on.

Sammy the Spy's flight times are in question in Timetable. To start with, simple addition and subtraction is required to work out the flight times, while later levels include more complex series of sums, to fully stretch the child and help Sammy to catch his plane.

The final program in this series, Spy Travels, introduces the child to world geography, as you zoom around the world looking at oceans and continents. As the child progresses, he/she must then seek out countries, rivers and cities to guide an aeroplane to cryptically-described locations.

All in all, a totally comprehensive educational aid to the curriculum based teaching subjects for the seven to 11 year old age groups, and a package that should seriously increase the child's interest in and attention to, the learning process.

Each of the three separate packages features brilliantly animated sequences and superb graphics to grab the child's attention straight away. The excellent sound effects complement the programs throughout and should leave the child eager to try again. Correct answers are always well rewarded, whilst incorrect answers lead to more help and encouragement for another attempt.

Quoted as being "the best home educational software there is," all I can say is that, whoever said that has extremely sound judgement. Whatever I have outlined here cannot do full justice to this superb suite of programs and, I would strongly recommend that you look at the Fun School 4 packages for yourself to see the full quality of the product. From what I have seen however, the Fun School 4 series should prove to be every bit as popular and successful as the earlier releases, all of which have enjoyed phenomenal sales figures. Millions of satisfied customers around the world cannot be all wrong, so try them for yourself and see what you have been missing.

Millions of satisfied customers around the world cannot be all wrong... Try them for yourself and see what you have been missing.
Logout